Items related to I Think You're Totally Wrong: A Quarrel

I Think You're Totally Wrong: A Quarrel 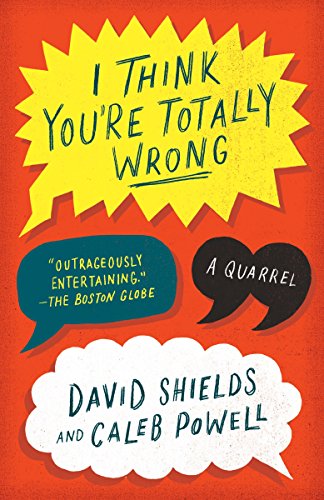 I Think You’re Totally Wrong is an impassioned, funny, probing, fiercely inconclusive, nearly-to-the-death debate. Shields and Powell talk about everything—marriage, family, sports, sex, happiness, drugs, death, betrayal, and (of course) writers and writing—in the name of exploring and debating their central question: the lived life versus the examined life. There are no teachers or students here, no interviewers or interviewees, no masters of the universe—only a chasm of uncertainty, in a dialogue that remains dazzlingly provocative and entertaining from start to finish.
James Franco’s film adaptation of I Think You’re Totally Wrong, starring the authors, premiered in 2015.

David Shields is the internationally bestselling author of twenty books, including Reality Hunger (named one of the best books of 2010 by more than thirty publications), The Thing About Life Is That One Day You'll Be Dead (New York Times bestseller), and Black Planet (finalist for the National Book Critics Circle Award); Other People: Takes and Mistakes is forthcoming from Knopf in February 2017. The recipient of a Guggenheim fellowship and two NEA fellowships, Shields has published essays and stories in the New York Times Magazine, Harper’s, Esquire, Yale Review, Village Voice, Salon, Slate, McSweeney’s, and Believer. His work has been translated into twenty languages.

Caleb Powell grew up in the Pacific Northwest, has played bass in a band, worked construction, and spent ten years teaching ESL and studying foreign languages on six continents. Now a stay-at-home father in Seattle, he has published stories and essays in The Doctor T. J. Eckleburg Review, Pleiades, and Whiskey Island Magazine.

“A daring descent into the ‘chasm of uncertainty.’”—Matt Seidel, Los Angeles Review of Books

“Start reading I Think You’re Totally Wrong, then try to stop; I dare you. It screws with your head in a way you can’t shake off, and it’s moving—weirdly moving. It ruined my work day. I loved it. Shields is opening up new ways to be a writer.”—Walter Kirn

“I Think You’re Totally Wrong helped make sense of the strange rigors of life as I know it—the balancing of art, work, motherhood, along with enough time to have those moments of adventure or inspiration so that the pleasure of art still feels filled with life, a sort of Proust versus Conrad question many writers or artists know. The book’s arc is seamless, deceptive, effective: by its close, the reader feels an antinarrative resolution, a sense that everyone leaves a bit more alive from the exchange.”—Edie Meidav, The Rumpus

“The premise of the book could easily play as straight farce: two self-involved and argumentative men argue with each other about . . . themselves. Often in a hot tub. ('You said you wanted homoerotic tension,' Powell says to Shields. 'Were you hitting on me?') But what unfolds is actually quite gripping, and they’re well aware of the farcical qualities. Not only do we witness personal experiences conscripted into intellectual work; we witness these disclosures getting heard and processed. In the end, the form of the book is more illuminating than any resolution the authors find to their central conflict. Shields and Powell offer a different vision of how the confessional might play out: rather than baring their psychic flesh for the sake of exposure and intimacy (‘You said you wanted homoerotic tension’), they are excavating complexities inside their experiences. . . . Shields and Powell have generated a ‘lived’ creative inquiry with its roots in the conflict between living and creating. ‘Art can serve people,’ Shields declares. ‘Basically, the royal road to salvation, for me, lies through an artist saying very uncompromising things about himself. And through reading that relentless investigation, the reader will understand something surprising about himself.’ This notion of investigation offers an alternative to confession. Its goal isn’t sympathy or forgiveness. Life is not personal. Life is evidence. It’s fodder for argument. To put the ‘I’ to work this way invites a different intimacy—not voyeuristic communion but collaborative inquiry, author and reader facing the same questions from inside their inevitably messy lives.”—Leslie Jamison, The Atlantic

“A worthy and important addition to the genre [book-in-dialogue], this casual conversation pushes readers to rethink fundamental questions about life and art.”—Publishers Weekly

“A stimulating intellectual interaction with lots of heart.”—Kirkus Reviews

“Shields and Powell approach their topics with clarity and wit, they poke and prod, they agree and disagree . . . an often contentious and always intelligent dialogue.”—Mark Levine, Booklist

“A fierce and funny debate about life and art.”—Type Books

“An impassioned, contentious, and ultimately contentious yet entertaining look at age-old debates about the life of the artist.”—Kevin Larimer, Poets & Writers

“I read this book at compulsive speed, thoroughly engaged by the weekend and the argument—its unbuttoned fluency and candor. I’m envious of the sheer loquaciousness of the conversation and its no-holds-barred freedom (of speech). Both Shields and Powell have their own style of eloquence. The Art v. Life theme may have been the essential trigger for the book, but it becomes engrossing on a score of other fronts.” —Jonathan Raban

“There’s a sense that we can actually see David and Caleb talking, even though, obviously, we can’t. It’s like eavesdropping on a riveting debate/conversation, and sometimes one takes one side, sometimes the other. One of the things I love most about the book is the tennis-match-in-slow-motion quality of the arguments, which made me question where I stand on the choices I might have made, and even continue to make.” —Susan Daitch

“This deeply personal book is a success. It’s quite daring in its confessional parts. Confession makes sense only when it costs something, when it’s courting disaster; I found that risk-taking in this book, and it’s bracing.” —Peter Brooks

“Most writers editing a taped conversation would cut all the stuff around the ‘point’—in this case, an argument about life and art—but it’s the way in which the conversation about life and art is entwined with the details of the two men’s lives and personalities that makes I Think You’re Totally Wrong so artful. A fascinating, fantastic book.” —Melanie Thernstrom

“I don’t think there’s anything quite like this book, which is way more authentic than fiction or structured argument. It held my attention from start to finish, the narrative line is strong, the characters are developed in an intriguing way, it made me laugh hard dozens of times, and not necessarily at the jokes. The quarrel never turns into false drama because it doesn’t need to.”—Brian Fawcett

1. I Think You're Totally Wrong: A Quarrel

2. I Think You're Totally Wrong : A Quarrel

3. I Think You're Totally Wrong: A Quarrel (Paperback)

Book Description Paperback. Condition: New. Language: English. Brand new Book. Caleb Powell always wanted to become an artist, but he overcommitted to life; his former professor David Shields always wanted to become a human being, but he overcommitted to art. The stay-at-home dad (three young girls) and the workaholic writer (eighteen books) head to the woods to spend four days together in a cabin, arguing life vs. art. I Think You're Totally Wrong is an impassioned, funny, probing, fiercely inconclusive, nearly-to-the-death debate. Shields and Powell talk about everything--marriage, family, sports, sex, happiness, drugs, death, betrayal, and (of course) writers and writing--in the name of exploring and debating their central question: the lived life versus the examined life. There are no teachers or students here, no interviewers or interviewees, no masters of the universe--only a chasm of uncertainty, in a dialogue that remains dazzlingly provocative and entertaining from start to finish. James Franco's film adaptation of I Think You're Totally Wrong, starring the authors, premiered in 2015. Seller Inventory # BZE9780804169813

4. I Think You're Totally Wrong: A Quarrel

Shipping: US$ 4.12
From United Kingdom to U.S.A.
Destination, rates & speeds

5. I Think You're Totally Wrong: A Quarrel

6. I Think You're Totally Wrong: A Quarrel

7. I Think You're Totally Wrong : A Quarrel

Shipping: US$ 20.61
From United Kingdom to U.S.A.
Destination, rates & speeds

8. I Think You're Totally Wrong: A Quarrel