Items related to Making Out in Japanese: Revised Edition

Making Out in Japanese: Revised Edition 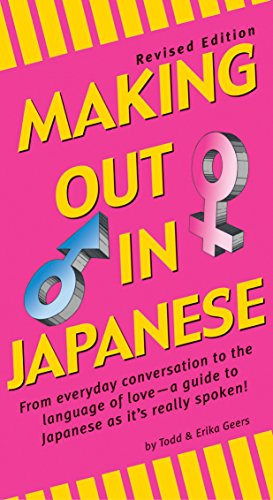 The books in the Making Out series are fun and accessible guides to languages as they're spoken on the street. These classic phrase books have been updated and expanded for use in informal situations such as bars, parties, or anywhere else one needs to know slang to survive! The books also now feature phrases written in their native script as well as in English, so the book can be shown to the person you are trying to communicate with. With transcriptions revised for easier pronunciation, these helpful books will have you making out in no time!

Making Out in Japanese is a fun, accessible and thorough guide to Japanese as it's really spoken. It has been updated and expanded to be even more helpful as a guide to modern colloquial Japanese for use in everyday informal interactions—giving access to the sort of catchy expressions that aren't covered in traditional language materials. As well as the romanized forms, each expression is now given in authentic Japanese script (kanji kana with furigana pronunciation clues), so that in the case of difficulties the book can be shown to the person the user is trying to communicate with.

Original edition by Todd and Erika Geers. Todd Geers is a graduate in Japanese studies from the University of Maryland and met his wife, Erika, in 1984 in Yokohama, Japan. He conceived the idea for a book on colloquial Japanese when he realized that what he was studying in his textbooks wasnÆt what he heard being spoken around him.

1. Making Out in Japanese: Revised Edition

2. Making Out in Japanese: Revised Edition