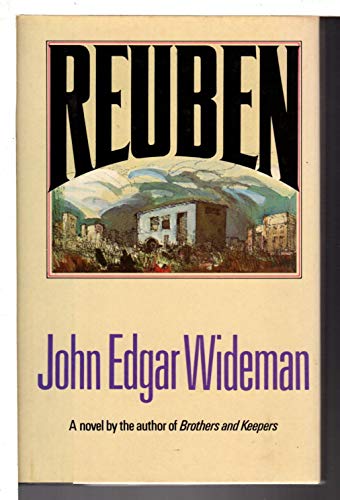 An aging, highly intelligent black lawyer who lives in a cluttered trailer is the go-between for the poor blacks of Homewood who must deal with the authorities downtown

Reuben, the gnomish character at the center of Wideman's (Hurry Home) latest novel, at first appears a writer's indulgence, repugnant on the outside, wise on the inside. An attorney operating from a beat-up ghetto trailer, he gives advice and, he says, can take care of things at the Mecca of legal officialdom, "Downtown," at no cost. But like its title characer, PEN-Faulkner Award-winner Wideman's novel should not be mistaken after a quick glance. Bringing his fiction back to Homewood, the setting of much of his work, Wideman has done a masterful job of character portrayal, not only in creating the gentle attorney but also with his clients Kwansa, in search of the son snatched by her estranged lover, and Wally, whose fantasy of murder involves airplane flights everywhere and an assassination near the marble-topped sinks of a Chicago bathroom. Employing a graceful, free-flowing, almost Joycean style, Wideman shows how the minds of his characters form connections and how their lives are played out as in a dream. Of special note are Reuben's wonderful musings on Eadweard Muybridge, the Victorian scientist who used photography to study motion in men and animals. This novel confirms the author's reputation as an important American writer.
Copyright 1987 Reed Business Information, Inc.

Reuben is a hump-backed lawyer offering quasi-legal aid from his abandoned trailer. Through his voice and those of his clientssuch as Kwansa, who fights to keep her child; Wally, a jaded basketball recruiter; and the enfeebled Clement, a young man living on the streetwe learn what it is to be black and defenseless, to watch white students "smart enough to be born a color they could change if they chose" playing frisbee. For blacks like Reuben no degree of cultural accommodation is enough; he concludes, Why accommodate? The narrative is not easy to follow, but it leaves a chilling message: "All black men have a Philadelphia. Even if you escape it, you leave something else behind. Part of you. A brother trapped there forever." Peter Bricklebank, City Coll., CUNY
Copyright 1987 Reed Business Information, Inc.

Book Description Condition: New. Reuben is a small man who, for little reward, helps people in big trouble. It is when he takes on Kewansa to try and get her child back from a man who has murdered a white man just to see what it was like, that his world starts to fall apart. Seller Inventory # 9780805003758