Items related to The Green Trees Beyond: A Memoir

Lawrence, R. D. The Green Trees Beyond: A Memoir 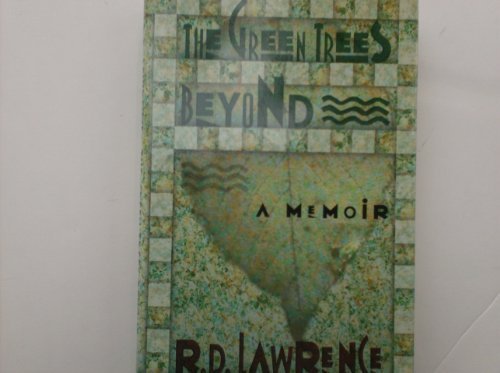 If memoirs tend to divide between pure storytelling and confession, R. D. Lawrence's is a memorable example of the storyteller's art. A man of natural modesty, he weaves the threads of his life with an affecting diffidence that gracefully mantles the quite astonishing adventures it has embraced. The result is a splendid tale.
Born in Spain in 1921, Lawrence was not yet fifteen when civil war broke out, stranding him in Barcelona after his family had been hastily evacuated and repatriated to England. Joining the Republican forces in the hot and frightening summer of 1936, he would fight in its infantry until 1938 when, cut off and surrounded, he fled over the Pyrenees. But his war was far from over. In 1939 he enlisted in the British Army and a year later was among thousands of men resued at Dunkirk. By January 1941 he was in North Africa with the 7th Battalion of the Royal Tank Regiment of the British 8th Army, and it was there he fought, though twice wounded, until Rommel's defeat. Then, in June 1944, he was so severely wounded at Normandy that the doctors said he would "never walk properly again." Indeed, some pressed for amputation.
R. D. Lawrence not only walked again, he went on to live a life of high adventure as a journalist, homesteader, and naturalist in the Canadian wilds.
That this man for whom killing formed so central a fact of life should today be known as an outspoken defender of all wild creatures may seem contrary in the extreme. And yet, as his memoirs so eloquently attest, his interest in the natural world began almost as soon as he could walk and continued even during his most dangerous wartime experiences. Indeed, in some respects he owes his miraculous recovery from his war wounds to that passion for nature.
Today, living in the Ontario backcountry with his wife, Sharon, and a menagerie that includes a wolf pack, R. D. Lawrence can take pride in the more than twenty books he has written on animals and animal behavior and, as well, on a lifetime devoted to nurturance, not war.

From Kirkus Reviews:
The bittersweet memoir of a respected naturalist and novelist (The White Puma, 1990) who finds peace and a surprising measure of happiness in the Canadian wilderness after enduring years of bloody conflict. Lawrence enlisted in the Spanish Republican army at the age of 14 and escaped to France just in time for WW II. He fought in the British army as a tank commander for the next several years until receiving a medical discharge for severe leg wounds. He was left emotionally shattered by his war experiences and unable to connect with other human beings. The entire memoir can be read as his attempt to heal through contact with nature wounds that were inflicted by his earliest contacts with man. Lawrence seems to bury the emotional content of his war passages under a barrage of mind-numbingly detailed descriptions--an understandable yet distracting idiosyncrasy. Similarly, he often slips into stilted scientific jargon when attempting to describe feelings and relationships, which can be quite jarring at times and often interrupts the flow of the narration. Only when describing the Canadian wilderness is Lawrence able to express any emotional connection to the story of his life, and perhaps the most telling passage of the memoir is his admission that he lived entirely without love until he was befriended by a ``savage brutalized wolf-dog.'' Lawrence describes a life that has been fraught with danger and adventure at every turn, but which does not succumb to any stereotypical philosophy of bravado or machismo. This memoir should appeal to fans of Lawrence's nature writings, but may be hard reading for those not already acclimated to his at times tedious writing style. -- Copyright ©1994, Kirkus Associates, LP. All rights reserved.
From Library Journal:
An author of more than 20 books (e.g., White Puma, LJ 4/15/90), Lawrence is best known for his writings about wildlife and wilderness conservation and especially about wolves. Now in his seventies, he turns his observations inward, telling his own story. Some of the passages here have appeared in other works. The first several chapters, covering Lawrence's childhood in Spain through his service in World War II, read like journal entries featuring lots of action but very little emotion or reflection. The second half of the book is almost lyrical in its descriptive passages, and the narration of his life's events are paced with a storyteller's ear. Here Lawrence reveals the emotion behind his ambition and reflects upon his chosen path. Told with modesty, gentle humor, and an honest perception of one man's place in the world, Lawrence's memoirs are a pleasure to read. Because of his reputation, libraries with environmental collections will want to consider, as will libraries strong in biography and nature writing.
Denise Sticha, Carnegie Lib. of Pittsburgh
Copyright 1994 Reed Business Information, Inc.

THE GREEN TREES BEYOND: A MEMOIR