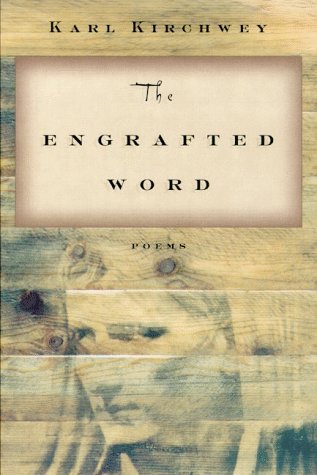 The graftings of flesh upon flesh, of history upon time and memory, of the New World on the Old, of language upon silence, of faith upon doubt: these are the graftings that form this third book of poems by Guggenhein Fellow and Rome Prize winner Karl Kirchwey. Whether he is writing of the intimate moment or the painfully personal, he reaches across time to link us to our past and to the larger universe of humankind. Kirchwey graces us with poetics of a high order even as he weaves the threads that tie this collection into a stunningly integrated whole. These are indeed poems that reward rereading.

Mysterious, compelling, abounding in allusion, the poems of Karl Kirchwey demand--and deserve--our fullest attention. In The Engrafted Word he presents one conventionally ordinary scene after another: a hospital room, a zoo, the view from a bus, a child watching birds. Yet always the poet reveals an underlying potential for the miraculous. In "Sonogram," for instance, the sight of an unborn fetus elicits an eloquent apostrophe. Elsewhere Kirchwey discerns the dead soul of his mother in an elephant's eyes, prompting this unlikely but moving elegy:

I mourned again, and worshiped after her,
buried in this landslide of a creature,
its crushing, dreamlike step, its slack repose,
its gaze, deep as the past or the hereafter...


Ezra Pound argued that "it is better to present one image in a lifetime than to produce voluminous works." In this collection, Kirchwey surpasses Pound's instruction, creating not only a bumper crop of indelible imagery but a meticulous record of what it means to be human. --Martha Silano About the Author:

Called a "poet of sumptuous resources" by Amy Clampitt, Karl Kirchwey has been published in such places as Antaeus, The New Yorker, and The Paris Review. Kirchwey is the director of the Unterberg Poetry Center at New York's 92nd Street YM-YWHA.