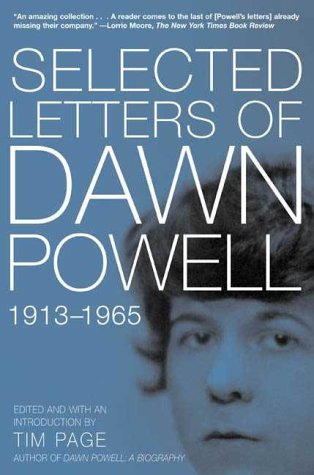 Selected Letters of Dawn Powell traces a richly talented writer's fifty-two-year journey from her childhood in a small Ohio town to the glitter of Manhattan. Powell was a prolific letter writer, and her correspondence provides an intimate look at the woman about whom The New York Times recently said: "[She] is wittier than Dorothy Parker, dissects the rich better than F. Scott Fitzgerald, is more plaintive than Willa Cather in her evocation of the heartland, and has more supple control of satirical voice than Evelyn Waugh."

Living most of her life in Greenwich Village, Powell supported herself as a writer through the Great Depression and two world wars while nursing an autistic son, an alcoholic husband, and her own parade of illnesses. In her correspondence, including gossip-filled letters to such luminaries as Edmund Wilson, John Dos Passos, and the legendary editor Max Perkins, we find the record of a courageous and dramatic woman who produced fifteen novels, ten plays, and more than one hundred stories.

The great prose comedian Flann O'Brien called humor "the handmaid of sorrow and fear." Perhaps O'Brien, who had more than the customary quotient of misery in his own existence, was exaggerating--but his insight is certainly borne out by the art and life of Dawn Powell. Seldom has a writer's curriculum vitae been so overshadowed by wretchedness: as Tim Page documents in his fine biography, Powell had to contend with career frustrations, a seriously disturbed son, late-breaking penury, and a misdiagnosed tumor so large that it was actually cracking her ribs by the time it was extracted. But Powell managed to maintain an extraordinary standard of levity in her fiction, which treats both Manhattan sophisticates and Midwestern rubes with evenhanded, satirical brilliance (think of her as a homegrown Evelyn Waugh, with an added soupçon of Yankee asperity). And the same thing holds true for her correspondence, which the ever-dutiful Tim Page has now assembled in Selected Letters of Dawn Powell: 1913-1965.

Powell modulated her epistolary voice for her various pen pals, a group that included John Dos Passos, Maxwell Perkins, and Edmund Wilson (whom she calls "Wig," perhaps a reference to his shiny-pated middle age). But throughout, she tends to put a comical gloss on her tribulations, with the tears of things peeking out through the cracks. As the very first letter in the collection reveals, the author already had a handle on her comedic resources at age 17, describing a dog's righteous indignation: "Saturday I decided to make a miniature peach meringue pie. When Benjamin caught a glimpse of me, suspiciously decorated with flour, he gave a low cry of pain and staggered away. He didn't return until late that night when I heard him weeping and gnashing his teeth out in the chicken yard." But Powell just got better from there--much better. This volume contains thousands of incidental barbs and felicities, which makes it a true browser's heaven. And nobody should overlook the marvelous, on-the-fly credo she addressed to a publisher who was about to turn down her whip-smart masterwork The Locusts Have No King:

Edmund Wilson, the critic, insists I have been writing "existential" novels for years, before Sartre. I object, for my novels are based on the fantastic designs made by real human beings earnestly laboring to maladjust themselves to fate. There is no principle for them to prove--they may disobey the law of gravity as they please. My characters are not slaves to an author's propaganda. I give them their heads. They furnish their own nooses.

Powell labored as hard as humanly possible to accommodate her own fate--with, perhaps, mixed results. But her Selected Letters are a glorious and supremely funny record of her long struggles and (truly) lasting triumphs. --James Marcus About the Author:

Tim Page is the author of Dawn Powell: A Biography and editor of Dawn Powell at Her Best and The Diaries of Dawn Powell. Formerly the chief music critic for The Washington Post, he is now the artistic advisor and creative chair for the St. Louis Symphony Orchestra.