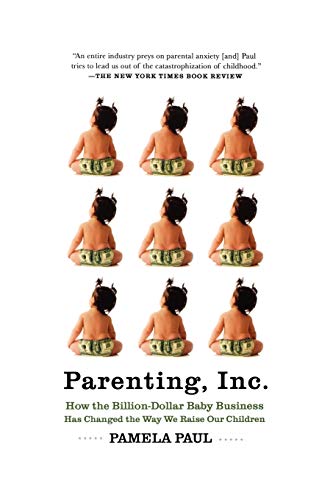 "An entire industry preys on parental anxiety . . . Paul tries to lead us out of the catastrophization of childhood."―The New York Times Book Review

Parenting coaches, ergonomic strollers, music classes, sleep consultants, luxury diaper creams, a never-ending rotation of DVDs that will make a baby smarter, socially adept, and bilingual before age three. Time-strapped, anxious parents hoping to provide the best for their baby are the perfect mark for the "parenting" industry.

In Parenting, Inc., Pamela Paul investigates the whirligig of marketing hype, peer pressure, and easy consumerism that spins parents into purchasing overpriced products and raising overprotected, overstimulated, and over-provided-for children. Paul shows how the parenting industry has persuaded parents that they cannot trust their children's health, happiness, and success to themselves. She offers a behind-the-scenes look at the baby business so that any parent can decode the claims―and discover shockingly unuseful products and surprisingly effective services.

Paul's book leads the way for every parent who wants to escape the spiral of fear, guilt, competition, and consumption that characterizes modern American parenthood.

Pamela Paul is the author of Pornified: How Pornography Is Damaging Our Lives, Our Relationships, and Our Families and The Starter Marriage and the Future of Matrimony. A frequent contributor to Time and The New York Times, she has also written for The Washington Post, Slate, Psychology Today, Redbook, Self, Ladies' Home Journal, and The Economist. She and her family live in New York.

When she was seven months old, my husband and I seriously considered enrolling our daughter, Beatrice, who has no hearing impairment, in baby sign language class. Oh, we did have some initial doubts: If Beatrice was busy learning how to fold and pleat her fingers into signing gestures, wouldn’t that take time and attention away from learning to speak? Wouldn’t being able to communicate through signs remove any incentive to talk? But our misgivings were brushed aside by the baby signing professionals and their acolytes. Signing is like crawling, they explained. Just as crawling gives your baby that taste of movement that motivates her to walk, signing inspires the voiceless communicator to learn how to verbalize. Not only do signing babies speak earlier, but research indicates they have higher IQ scores, by an average of twelve points, at age eight, they pointed out.

Baby signing—for babies who can hear perfectly well—had become so popular that we also felt prodded by a competitive impetus: Everyone else seemed to be signing their children up. Our friends Paul and Ericka had a daughter who signed; she waved and poked her chubby hands about whenever she wanted to speak her mind. A genius! Shouldn’t Beatrice have the same advantage? Any parent can understand why we were tempted. We all want to provide our children with every opportunity and are eager to get a sense of what’s going on inside our preverbal babies’ minds.

Still, the classes were expensive. Plus, it would take time away from work in order for me to commute to wherever it was that baby signers convened, surely not in my neighborhood, where most parents struggle to afford quality day care. As an alternative, we could allocate precious weekend time to the classes, allowing both my husband and me to attend, but even the thought of adding one more thing to our pittance of “time off” made me weary. Either way, on top of everything, we would have to teach the babysitter how to sign too, and when would we ever find the time to do that? Wouldn’t Beatrice get frustrated if her caretaker didn’t understand what she was trying to “say”?

On the other hand, there were incentives to get Beatrice started on language skills immediately. Getting into preschool in New York City is cutthroat, as it is increasingly around the country. Many applications include ample space in which to list the “classes” two-year-olds have attended before they’ve even enrolled in their first school. How could I forgo an activity that might provide the decisive advantage? I would kick myself ten times over for my neglect. If Beatrice proved to be an “accelerated learner,” we could potentially enroll her at a magnet public school later on, rather than a private school, either one a necessity since our neighborhood is bereft of good public schools. This would in turn free up money for our other children’s education, in case they didn’t get into a good public school.

If Beatrice didn’t “measure up,” the tuition for private nursery school alone would run up to $25,000 a year; if we had three kids, the price of education would eventually eat up a six-figure income each year. Suddenly, it seemed that if Beatrice didn’t baby-sign, we wouldn’t have enough money to afford three kids, something my husband and I, both products of large families, really want.

Or so my snowballing logic went. Like all parents, I am confronted every day with complex spending decisions for my children. And I can drive myself nuts trying to weigh the pros, cons, and costs of the overwhelming options. No matter what I do, someone else seems to be doing enviably more or improbably less, and either way, their child and family seem all the better for it.

But with the sign language conundrum, I had the benefit of finding an answer through my job as a journalist. While researching a story on cognitive development for Time magazine, I came upon a comprehensive review of studies on baby signing. Contrary to what I had been led to believe by the baby signers’ websites and brochures, the evidence is all over the place. Some studies even showed signing babies to be worse off than their non-gesturing counterparts. After an interview with one of the review’s authors, my husband and I decided to bypass the whole thing. (For the record, our daughter speaks just fine and, at age three, gesticulates in her own, invented ways.)

Making these kinds of decisions—choosing what not to do or buy for our baby—isn’t easy. Saying no runs counter to all our instincts as parents and to everything the parenting culture tells us. Aren’t we supposed to do everything we possibly can for our children? Doesn’t this frequently mean sparing no expense? Many parents already feel tremendous guilt for working long hours and spending less time than they would like with their children. Now add to that a layer of guilt for not spending as much money on them as we could. With every no, you can hear the judgments and recriminations, be they imagined or actual: What are you going to do with that money instead? Go out to dinner more often? Buy yourself more clothes? Sock money away in your retirement fund—before taking care of your own children? We are pressured to spend by the cautions of experts, the advice of parenting pros, and the endless and frightfully persuasive marketers proclaiming that certain goods, services, activities, and environments ensure a happier, smarter, healthier, and safer child. A more emotionally secure and socially successful child. A better baby.

at the time when we feel most disabled as decision makers—by experts, advertisements, product overload, our own niggling doubts—the need to make reasoned decisions is greater than ever. Raising kids today costs a fortune. Rather than plot family size based on any number of factors—one’s ideal conception of family, the kind of life one wants to lead, the disruption that pregnancy and child rearing might bring to one’s career, the terrifying thought of traveling to visit grandparents with a full brood in tow—often the decision about whether to have one child, or more, pivots on the question: Can we afford it?

This just seems wrong. How can money be what makes or breaks such a personal decision? “Why can’t we just have a kid the way our parents did in the seventies?” asked a friend I’ve known since my early twenties—I’ll call her Ava. She wasn’t referring to giving birth on a leftover hippie commune, nor did she especially hanker for a child outfitted in an orange velour ensemble and bowl haircut. She simply wanted to be able to afford having a baby, perhaps two, as so many of our parents did, almost unthinkingly, just a few decades ago. Whether or not to have ki

2. Parenting, Inc. : How we Are Sold on $800 Strollers, Fetal Education, Baby Sign Language, Sleeping Coaches, toddler Couture, and Diaper Wipe Warmers--and What it Means for our Children

4. Parenting, Inc.: How the Billion-Dollar Baby Business Has Changed the Way We Raise Our Children

8. Parenting, Inc.: How We Are Sold on $800 Strollers, Fetal Education, Baby Sign Language, Sleeping Coaches, Toddler Couture, and Diaper Wipe Warmers--And What It Means to Our Children