Items related to Christian the Lion: Based on the Best Selling True...

Christian the Lion: Based on the Best Selling True Story 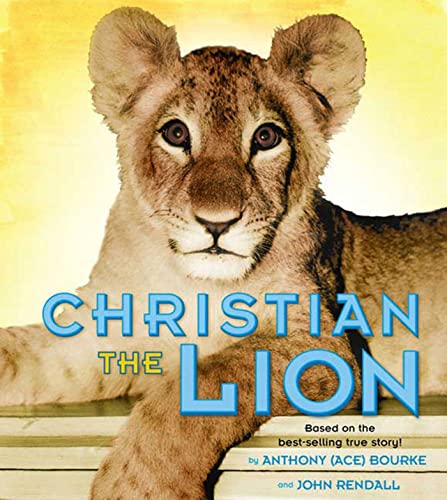 "In 1971 we wrote A Lion Called Christian, the story of a lion from London who returned to Africa. Forty years later, the Internet's YouTube has introduced a new world audience to Christian." ―Ace Bourke and John Rendall

Through many previously unseen photographs, this picture book follows Christian as he grew from a tiny ball of fur into a majestic lion. Here is the incredible story of the remarkable journey to take Christian back to the wild.

Anthony (Ace) Bourke is one of Australia's leading art curators and an Aboriginal art specialist. Passionate about critical environmental issues, Ace hopes to tackle more wildlife and conservation projects. He lives in Sydney, Australia, with his two cats.

John Rendall is a member of the Royal Geographic Society and a trustee of the George Adamson Trust. He has traveled to Africa to work on conservation projects, lodges, and reserves. He has three children, who are also interested in wildlife and conservation. John divides his time between London, England, and Sydney, Australia.

Kindergarten-Grade 3—The story the lion cub purchased from the exotic animals department at Harrods in 1969 has transitioned from YouTube phenomenon to middle grade chapter book (Delacorte, 2009) and now to picture book. While details fleshed out in the chapter book are glossed over and sometimes poorly explained here, this book succeeds because of the authors' decision, many years ago, to document their time with Christian so well. The lion's story, presented as a scrapbook, is full of original photographs of the cub growing up in a London flat and his eventual relocation to the Kenyan bush. Christian's slightly anthropomorphized narrative has a brief introduction and conclusion by Bourke and Rendall. Young readers may not grasp the absurdity of keeping a wild animal as a pet, nor the serendipitous circumstances that led to Christian's placement with George and Joy Adamson, but they will enjoy the photos of Christian riding around London in a convertible, playing hide-and-seek with a blanket, and meeting the pride of lions that he would eventually join. The layout is excellent, with both text and photos presented in an uncluttered, easy-to-follow format. This is ultimately a satisfying story about an extraordinary relationship. It will intrigue children raised on Owen and Mzee and Knut the polar bear.—Kara Schaff Dean, Walpole Public Library, MA END

2. Christian the Lion: Based on the Best Selling True Story

3. CHRISTIAN THE LION: BASED ON THE