Neil A. Campbell; Jane B. Reese 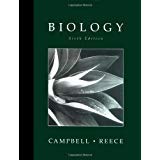 The Sixth Edition of BIOLOGY by Neil Campbell and Jane Reece builds upon the earlier versions' dual goals to both help readers develop a conceptual appreciation of life within the context of integrating themes, and to inspire readers to develop more positive and realistic impressions of science as a human activity. <P>The authors have thoroughly updated each of the book's eight units to reflect the existing progress in our understanding of life at its many levels, from molecules to ecosystems. Examples of updated content include the Human Genome Project, the revolution in systematics, HIV as a research model in evolutionary biology, the role of cell-signaling pathways in plant responses, new frontiers in neurobiology, and experimental approaches that are advancing ecology. To assure accurate representation of each field of biology, a team of stellar specialists has worked with the authors in updating every unit. <P>An innovative design breakthrough ensures that the art is as current as the content. Guided Tour diagrams explicitly guide readers through the more challenging figures, succinctly explaining key structures, functions, and steps of processes within the figure, reducing the need to look back and forth between legend and art. It's as if an instructor were looking over the reader's shoulder and clarifying each part of a figure! Guided Tour commentary is set in blue, making it easy to differentiate these explanations from ordinary labels and keeping the figure itself clear and uncluttered. For college instructors and students.

Neil A. Campbell has taught general biology for 30 years, and with Dr. Reece, has coauthored Biology, Sixth Edition, the most widely used text for biology majors. His enthusiasm for sharing the fun of science with students stems from his own undergraduate experience. He began at Long Beach State College as a history major, but switched to zoology after general education requirements "forced" him to take a science course. Following a B.S. from Long Beach, he earned an M.A. in Zoology from UCLA and a Ph.D. in Plant Biology from the University of California, Riverside.

He has published numerous articles on how certain desert plants thrive in salty soil and how sensitive plant (Mimosa) and other legumes move their leaves. His diverse teaching experiences include courses for non-biology majors at Cornell University, Pomona College, and San Bernardino Valley College, where he received the first Outstanding Professor Award in the Department of Botany and Plant Sciences at UC Riverside, which recognized him as the university's Distinguished Alumnus for 2001. In addition to Biology, Sixth Edition, he is coauthor of Essential Biology.

Jane B. Reece has worked in biology publishing since 1978, when she joined the editorial staff of Benjamin Cummings. Her education includes an A.B. in Biology from Harvard University, an M.S. in Microbiology from Rutgers University, and a Ph.D. in Bacteriology from the University of California, Berkeley. At UC Berkeley and later as a post-doctoral fellow in genetics at Stanford University, her research focused on genetic recombination in bacteria. Dr. Reece taught biology at Middlesex County College (New Jersey) and Queensborough Community College (New York). During her 12 years as an editor at Benjamin Cummings, she played major roles in a number of successful textbooks. Subsequently, she was a coauthor of The World of the Cell, Third Edition, with W. M. Becker and M. F. Poenie. With Dr. Campbell, she coauthors Biology, Sixth Edition, and Essential Biology.

Book Description Pearson. Hardcover. Condition: GOOD. Spine creases, wear to binding and pages from reading. May contain limited notes, underlining or highlighting that does affect the text. Possible ex library copy, will have the markings and stickers associated from the library. Accessories such as CD, codes, toys, may not be included. Seller Inventory # 3123781922

Book Description Benjamin Cummings, 2001. Hardcover. Condition: Good. Has moderate shelf wear, highlighting, underlining and/or writing. Great used condition. Heavy wear. A portion of your purchase of this book will be donated to non-profit organizations.Over 1,000,000 satisfied customers since 1997! Choose expedited shipping (if available) for much faster delivery. Delivery confirmation on all US orders. Seller Inventory # 10642952

Book Description Benjamin Cummings, 2001. Hardcover. Condition: Good. Some wear, but still a good reading copy. A portion of your purchase of this book will be donated to non-profit organizations.Over 1,000,000 satisfied customers since 1997! Choose expedited shipping (if available) for much faster delivery. Delivery confirmation on all US orders. Seller Inventory # 10422106

Book Description Benjamin Cummings, 2001. Hardcover. Condition: Very Good. Has moderate shelf and/or corner wear. Great used condition. A portion of your purchase of this book will be donated to non-profit organizations.Over 1,000,000 satisfied customers since 1997! Choose expedited shipping (if available) for much faster delivery. Delivery confirmation on all US orders. Seller Inventory # 10621753

Book Description Benjamin Cummings, 2001. Hardcover. Condition: Good. Has heavy shelf wear, but still a good reading copy. A portion of your purchase of this book will be donated to non-profit organizations.Over 1,000,000 satisfied customers since 1997! Choose expedited shipping (if available) for much faster delivery. Delivery confirmation on all US orders. Seller Inventory # 10621751