Items related to Life in the Universe (2nd Edition)

Life in the Universe (2nd Edition) 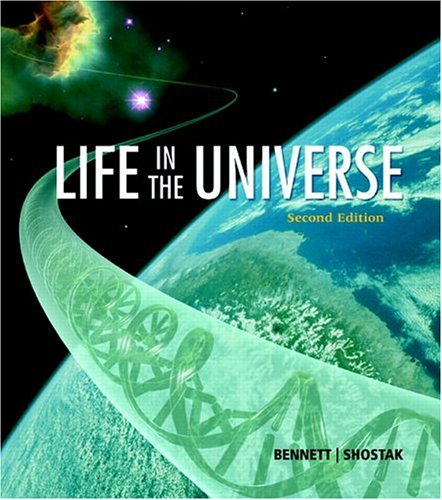 Key Message: Life in the Universe takes readers on a journey through the solar system and beyond, using a rigorous yet accessible introduction to astronomy, biology, chemistry, and geology to explain natural phenomena and explore unanswered scientific questions. The Second Edition has been thoroughly revised to include updated scientific discoveries, optional quantitative coverage, an enhanced illustration program, and expanded coverage of the solar system and stellar material. Key Topics: Introducing Life in the Universe:  A Universe of Life?, The Science of Life in the Universe, The Universal Context of Life. Life on Earth: The Habitability of Earth, The Nature of Life on Earth, The Origin and Evolution of Life on Earth. Life in the Solar System: Searching for Life in Our Solar System, Mars, Life on Jovian Moons, The Nature and Evolution of Habitability.   Life Among the Stars: Habitability Outside the Solar System, The Search for Extraterrestrial Intelligence, Interstellar Travel and the Fermi Paradox. Epilogue: Contact – Implications of the Search and Discovery Market: For all readers interested in a rigorous yet accessible introduction to astronomy, biology, chemistry, and geology, while exploring fundamental pan-scientific questions such as: How did life begin on Earth? What are the most extreme forms of life currently known? What are the challenges of trying to colonize another planet?

Jeffrey Bennett received a B.A. in biophysics from the University of California at San Diego in 1981 and a Ph.D. in astrophysics from the University of Colorado in 1987. He currently spends most of his time as a teacher, speaker, and writer. He has taught extensively at all levels, including having founded and run a science summer school for elementary and middle school children. At the college level, he has taught more than 50 college courses in astronomy, physics, mathematics, and education. He served two years as a visiting senior scientist at NASA headquarters, where he helped create numerous programs for science education. He also proposed the idea for and helped develop the Voyage Scale Model Solar System, which opened in 2001 on the National Mall in Washington, D.C.

Besides his astronomy textbooks, he has written college-level textbooks in astronomy, mathematics, and statistics, and a book for the general public, On the Cosmic Horizon (Addison-Wesley, 2001). He also recently completed his first children's book, Max Goes to the Moon (Big Kid Science, 2003). When not working, he enjoys participating in masters swimming and in the daily adventures of life with his wife, Lisa, his children Grant and Brooke, and his dog, Max.

Seth Shostak earned his B.A. in physics from Princeton University (1965) and a Ph.D. in astronomy from the California Institute of Technology (1972). He is currently a senior astronomer at the SETI Institute in Mountain View, California, where he helps press the search for intelligent cosmic company. For much of his career, Seth conducted radio astronomy research on galaxies and investigated the fact that these massive objects contain large amounts of unseen mass. He has worked at the National Radio Astronomy Observatory in Charlottesville, Virginia, as well as the Kapteyn Astronomical Institute in Groningen, The Netherlands (where he learned to speak bad Dutch).

Seth also founded and ran a company that produced computer animation for television. He has written several hundred popular articles on various topics in astronomy, technology, film, and television, and teaches courses at the California Academy of Sciences and elsewhere. A frequent fixture on the lecture circuit, Seth gives approximately 70 talks annually at both educational and corporate institutions. He is a Distinguished Speaker for the American Institute of Aeronautics and Astronautics and a frequent commentator on astronomical matters for radio and television. His book Sharing the Universe (Berkeley Hills Books, 1998) details the rationale and expectations of the scientific search for intelligent life. When he's not trying to track down the aliens, Seth can often be found in the darkroom, where he continues to hope that something interesting will develop.

Bruce Jakosky received his B.S. degree in geophysics and space physics from UCLA (1977) and his Ph.D. in planetary science and geophysics from the California Institute of Technology (1982). He has been at the University of Colorado in Boulder since 1982 and is now a Professor in the Department of Geological Sciences and the Laboratory for Atmospheric and Space Physics. He teaches undergraduate and graduate courses in geology, planetary science, and astrobiology, and his research emphasizes planetary geology, the evolution of the surface and atmosphere of Mars, and the potential for life on Mars and elsewhere in the solar system. In addition, he is exploring the connections between society and science, especially astrobiology.Bruce has been involved in analysis of data from the Viking, Solar Mesosphere Explorer, Clementine, Mars Observer, Mars Global Surveyor, and Mars Odyssey spacecraft missions. He heads up the University of Colorado's astrobiology program, which is a part of the NASA Astrobiology Institute. He has served on numerous advisory committees within NASA and the National Research Council and has been editor or a member of the editorial board of a number of planetary science and astrobiology journals. He is a co-editor of the book Mars (Univ. Arizona Press, 1992), and author of the book The Search for Life on Other Planets (Cambridge Univ. Press, 1998). He doesn't really like gardening, but does it to keep his yard from becoming completely overgrown with weeds, and he appears to love flying judging by the amount of time he spends traveling to meetings.

1. Life in the Universe (2nd Edition)

3. LIFE IN THE UNIVERSE (2ND EDITIO