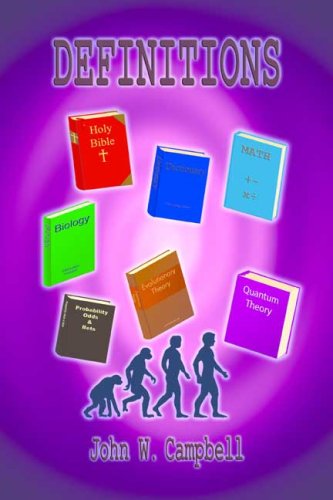 Vigorously tackling one of education s most controversial issues, John W. Campbell goes through the different aspects of the debate between advocators of intelligent design and advocators of evolution. He proposes his thesis that, contrary to popular belief, intelligent design and evolution may not be mutually exclusive but, rather, may be the only explanation for the origin of humankind. By dissecting the terminology and phrasing of both sides of the argument, he meticulously points out problems with definition and connotation, claiming that the personal biases of individuals have given these words meanings they were not meant to have. An analysis of each part of the argument, including the difference between fact and fiction, the legacy of history, and the impact of religion and science, provides an evaluation of these biases.

Concerned by his observations that many are trying to remove God from society, Campbell offers suggestions for alternative ways of looking at society, examines his own biases, and urges the reader to do the same. Definitions provides an in-depth, straightforward look at a complex and muddled issue as it examines such questions as where did we come from, how did we get where we are today, and what should we do about it?

A native of central New York and now residing in Morgantown, West Virginia, with his wife, Rita, John W. Campbell was inspired to write this thesis by current events relating to the presentation of biology to high school students and by the arguments presented in the national media. He holds a bachelor's degree in chemistry from Syracuse University and an associate's degree in medical technology from State University of New York. In addition to writing, Campbell enjoys motorcycling, woodworking, golf, and reading, and is a board member of the American Red Cross and Milan Puskar Healthright. He is also a former pilot.