Items related to The Daddy Shift: How Stay-at-Home Dads, Breadwinning...

Smith, Jeremy A. The Daddy Shift: How Stay-at-Home Dads, Breadwinning Moms, and Shared Parenting Are Transforming the American Family

The Daddy Shift: How Stay-at-Home Dads, Breadwinning Moms, and Shared Parenting Are Transforming the American Family 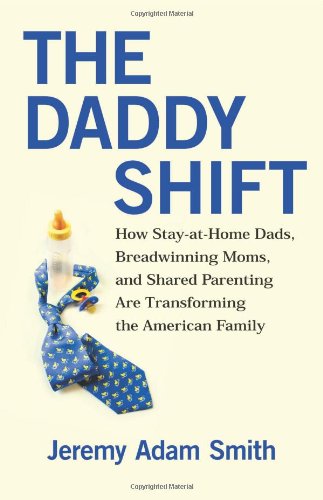 A revealing look at stay-at-home fatherhood-for men, their families, and for American society

It's a growing phenomenon among American families: fathers who cut back on paid work to focus on raising children. But what happens when dads stay home? What do stay-at-home fathers struggle with-and what do they rejoice in? How does taking up the mother's traditional role affect a father's relationship with his partner, children, and extended family? And what does stay-at-home fatherhood mean for the larger society?

In chapters that alternate between large-scale analysis and intimate portraits of men and their families, journalist Jeremy Adam Smith traces the complications, myths, psychology, sociology, and history of a new set of social relationships with far-reaching implications. As the American economy faces its greatest crisis since the Great Depression, Smith reveals that many mothers today have the ability to support families and fathers are no longer narrowly defined by their ability to make money-they have the capacity to be caregivers as well.

The result, Smith argues, is a startling evolutionary advance in the American family, one that will help families better survive the twenty-first century. As Smith explains, stay-at-home dads represent a logical culmination of fifty years of family change, from a time when the idea of men caring for children was literally inconceivable, to a new era when at-home dads are a small but growing part of the landscape. Their numbers and cultural importance will continue to rise-and Smith argues that they must rise, as the unstable, global, creative, technological economy makes flexible gender roles both more possible and more desirable.

But the stories of real people form the heart of this book: couples from every part of the country and every walk of life. They range from working class to affluent, and they are black, white, Asian, and Latino. We meet Chien, who came to Kansas City as a refugee from the Vietnam War and today takes care of a growing family; Kent, a midwestern dad who nursed his son through life-threatening disabilities (and Kent's wife, Misun, who has never doubted for a moment that breadwinning is the best thing she can do for her family); Ta-Nehisi, a writer in Harlem who sees involved fatherhood as "the ultimate service to black people"; Michael, a gay stay-at-home dad in Oakland who enjoys a profoundly loving and egalitarian partnership with his husband; and many others. Through their stories, we discover that as America has evolved and diversified, so has fatherhood.
From the Trade Paperback edition.

Jeremy Adam Smith is a most purposeful father, a periodic Stay-at-Home Dad who sees his role as not just a choice that's best for his family but as a sign of a rapidly changing societal landscape. . . . His new book, The Daddy Shift, is a chronicle of a time that he predicts we will look back upon as the start of permanent change.—Lisa Belkin, New York Times

"A combination of scholarly research (citing economic and historical trends, sociological and psychological studies, and labor statistics), revealing profiles of stay-at-home dads and their families, and poignant anecdotes from Smith's own life. The personal passages are the book's most affecting ones, as Smith reveals himself not as some know-it-all superdad but as a learn-as-you-go parent who had to sort out his own complex feelings."—Regan McMahon, San Francisco Chronicle

"His investigations are very well researched, and he's pursued them with a rigorous intellectual integrity that makes his arguments engagingly persuasive. The result is an impressive book that even the childless should read, for at essence, The Daddy Shift is not just about stay-at-home dads, but about the changing roles of men and women in society."—Mothering

"A gentle but persistent appeal to get beyond all those preconceived notions and make the choices that work best for ourselves and our families."—Body + Soul

"Forty years ago, a man who wanted to share child care equally with his wife would have been called 'deviant,' and a wife who wanted him to would have been condemned as an 'unnatural' mother. The Daddy Shift shows how far we have come and how much we have to gain by completing this revolution in marriage and parenthood."—Stephanie Coontz, author of Marriage, a History: How Love Conquered Marriage
From the Trade Paperback edition.

1. The Daddy Shift: How Stay-at-Home Dads, Breadwinning Moms, and Shared Parenting Are Transforming the American Family

2. The Daddy Shift: How Stay-at-Home Dads, Breadwinning Moms, and Shared Parenting Are Transforming the American Family Smith, Jeremy A.