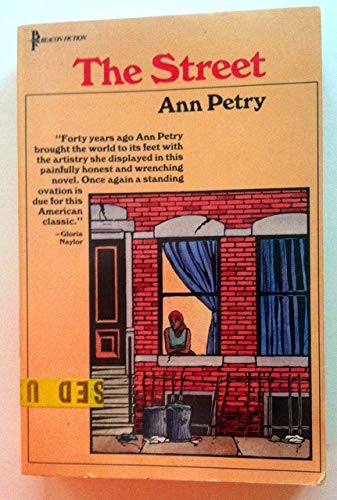 The classic urban tale of a young black woman's struggle to raise her son alone amid the violence, poverty, and racial dissonance of 1940s Harlem.

Ann Petry (1908-1997), a black novelist, short story writer, and writer of books for young people, is one of America's most distinguished authors. Ann began by studying pharmacology, and in 1934, received her Doctor of Pharmacy degree from the University of Connecticut College of Pharmacy. She worked as a registered pharmacist in Old Saybrook and in Lyme, and during these years wrote several short stories. When she married George David Petry in 1938, the course of her life changed. They lived in New York City, and Ann went to work for the Harlem Amsterdam News. By 1941, she was covering general news stories and editing the women's pages of the People's Voice in Harlem. Her first published story appeared in 1943 in the Crisis, a magazine published monthly by the NAACP. Subsequent to that, she began work on her first novel, The Street, which was published in 1946 and for which she received the Houghton Mifflin Literary Fellowship. Mrs. Petry has written two more novels, The Country Place and The Narrows, and numerous short stories, articles and children's books. In addition, she was appointed visiting professor of English at the University of Hawaii (1944 - 45) and has lectured widely throughout the United States. Ann returned with her husband to Old Saybrook in 1947 and lived there until here death. They have one daughter.

Ann Petry puts forth a painfully honest treatise on black/white relations in The Street, and while it was written nearly fifty years ago, her unblinking insights and powerful commentary on the dynamics of race in the United States remain accurate today. Lutie Johnson, an intelligent, strong, and beautiful black woman, is the vehicle for Ann Petry's message. Separated from her husband, Lutie is doing her best to raise an eight-year-old son, achieve independence from her father, advance in her job, and work her way out of the Harlem streets, which she calls "The North's lynch mobs ... the method the big cities use to keep Negroes in their place." Streetwise, she is able to avoid being conned and to exploit a con artist to get ahead. Though her self-knowledge is thorough, it can't stop her entanglement in a tradition of oppression and an upbringing which blames whites for present afflictions. Her goals and values are her strength, enabling her to make decisions when there is no apparent choice and to face a justice system fraught with injustice. She ultimately escapes, but not without a sacrifice that rips apart any woman's heart. -- For great reviews of books for girls, check out Let's Hear It for the Girls: 375 Great Books for Readers 2-14. -- From 500 Great Books by Women; review by Suzanne Leslie Simmons