Huston, James L. The Panic of 1857 and the Coming of the Civil War

The Panic of 1857 and the Coming of the Civil War 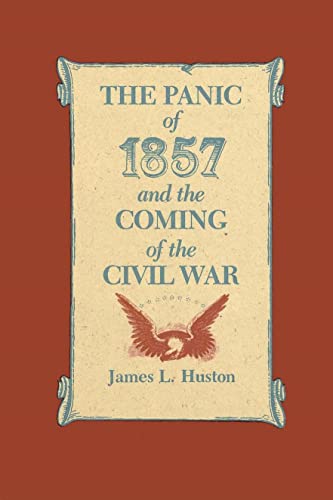 In the autumn of 1857, sustained runs on New York banks led to a panic atmosphere that affected the American economy for the next two years. In The Panic of 1857 and the Coming of the Civil War, James L. Huston presents an exhaustive analysis of the political, social and intellectual repercussions of the Panic and shows how it exacerbated the conflict between North and South.The panic of 1857 initiated a general inquiry between free traders and protectionists into the deficiencies of American economic practices. A key aspect of this debate was the ultimate fate of the American worker, an issue that was given added emphasis by a series of labor demonstrations and strikes. In an attempt to maintain the material welfare of laborers, northerners advocated a program of high tariffs, free western lands, and education. But these proposals elicited the opposition of southerners, who believed that such policies would not serve the needs of the slaves system. Indeed, many people of the period saw the struggle between North and South as an economic one whose outcome would determine whether laborers would be free and well paid or degraded and poor.Politically, the Panic of 1857 resurrected economic issues that had characterized the Whig-Democratic party system prior to the 1850s. Southerners, observing the collapse of northern banks, believed that they could continue to govern the nation by convincing northern propertied interests that sectionalism had to be ended in order to ensure the continued profitability of intersectional trade. In short, they hoped for a marriage between the Yankee capitalist and the southern plantation owner.However, in northen states, the Panic had made the Whig program of high tariffs, a national bank, and internal improvements popular with distressed members of the community. The country's old-line Whigs and nativists were particularly affected by the state of economic affairs. When Republicans moved to adopt a portion of the old Whig program, conservatives found the attraction irresistible. By maintaining their new coalition with conservatives and by exploiting the weaknesses of the Buchanan administration, the Republicans managed to capture the presidency in 1860.No other book examines in such detail the political ramifications of the Panic of 1857. By explaining how the economic depression influenced the course of sectional debate, Huston has made an important and much-needed contribution to Civil War historiography.

1. The Panic of 1857 and the Coming of the Civil War (Paperback or Softback)