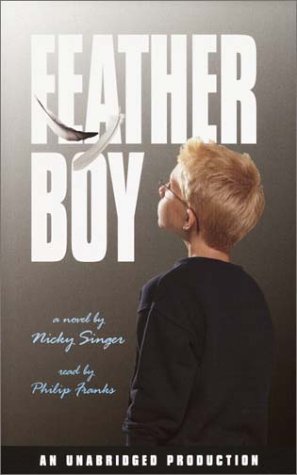 "Top flat, Chance House. You can go there...You are the sort of boy who can fly." That's what Edith Sorrell, mysterious resident of Mayfield Rest Home, says when Robert asks her to share a wisdom with him as part of a class project. And even thought Robert Nobel, a.k.a Norbert No-Bottle, the perpetually picked-on calss squirt, is convinced she's batty, he's determined to pluck up his courage ad go. After all, what does Robert have to lose? His dad is busy with his new family, his mum is always at work, and the school bully is making his life miserable.
But Edith is hiding a secret about boarded-up Chance House's past that's more complicated than Robert ever imagined. The search for the turth begins in the top-floor flat with a few small feather. Uncovering it will change both of their lives forever.

A well-known actor in England, Philip Franks is perhaps best known there for his role of Charlie in the popular television series The Darling Buds of May, in which he starred with Catherine Zeta Jones. He also played Hamlet for the Royal Shakespeare Company. Past BBC programs include Le Grand Meaulnes, Spirit Wrestlers and The Map That Changed the World.

It is a rare author indeed who launches her first novel for young readers so conclusively into the "must-read books of the year" category. In Feather Boy, Nicky Singer traces a character-defining sequence of events in the life of a boy named Robert Nobel. He is often the butt of classroom jokes and pranks--and being called Norbert No-bottle all the time isn't much fun either. He secretly wants to be somebody. To have a voice. To have friends.

Robert's participation in the Elders Project changes his life forever. Selected members of his class are chosen to visit and interact with the elderly residents of Mayfield Rest Home--to find out about their lives and to "counter ignorant attitudes about such senior members of society." Robert's main attacker, classmate Jonathan Niker, considers the old people "vegetables," but Robert's own buried true-life personality is slowly unearthed by Edith--a prickly resident who singles him out. Edith is considered quite mad; she's haunted by the unhappy memories of her son's tragic death at her previous home, Chance House. As Edith's condition deteriorates and the Elders Project heads towards its conclusion, Robert is drawn deeper and deeper into her story. His visits to the derelict Chance House become more frequent, and one fateful trip to sleep there overnight as a dare with Niker heralds the first step on Robert's own journey in search of his real self.

Feather Boy is more than just a story about bullying. It's about finding your voice, shouting from the rooftops about something you believe in, refusing to back down, helping a friend, and never giving up. An enormously uplifting, accomplished, and satisfying novel. (Age 10 and older) --John McLay, Amazon.co.uk

British author Nicky Singer has written six books for adults. This is her first novel for young people.