Items related to Silent to the Bone

E.L. Konigsburg Silent to the Bone

Silent to the Bone 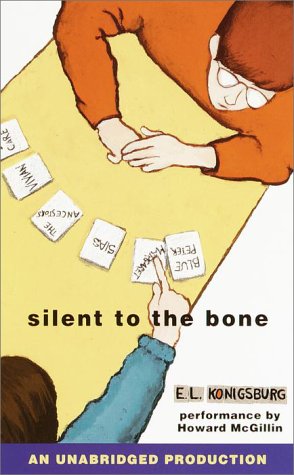 On Wednesday, November 25, at 2:43 pm, Eastern Standard Time, Branwell Zamborska is struck dumb. Nikki, his baby half sister, has slipped into a coma. Branwell dials 911, but when the emergency operator answers, he cannot speak. He cannot explain what is wrong. He cannot utter a sound. Vivian Shawcurt, the au pair from England, takes over. She tells the emergency medical team that Branwell dropped Nikki and shook her.

As Branwell's best friend, Connor investigates the events leading up to the silence, he slowly discovers what Branwell's problems really are and what it takes to help Branwell reveal what happened that Wednesday afternoon.

What happened on Wednesday, November 25, 2:43 P.M., Eastern Standard Time, to cause Branwell Zamborska to become mute? All anyone knows is that he called 911 because his baby sister, Nikki, had stopped breathing, and when he was unable to speak to the operator, Vivian, the English au pair, came on the line to say that Branwell had dropped the baby and shaken her. His best friend, Connor, begins visiting him at the juvenile behavioral center, where he has been sent while Nikki remains in a coma at the hospital. Working out a code they both can use, Connor begins the long process of trying to communicate with his friend to find out what really happened. With the help of his own half-sister and some canny detective work, Connor uncovers a complex, multilayered tale of human desires, adolescent confusion, and a touch of menace.

E.L. Konigsburg, brilliant Newbery Medal-winning author of From the Mixed-Up Files of Mrs. Basil E. Frankweiler and The View from Saturday, has honed her skills to a fine point. Her keen understanding of young people is matched by her ability to create suspenseful, page-turning masterpieces. This beautifully written story is darker than some of her others, with a remarkably true glimpse into a young man's inner world. (Ages 10 to 14) --Emilie Coulter

E. L. Konigsburg is the author of a number of successful children's books, including two Newbery Award winners and one Newbery Honor Book. Her output is diverse: including novels, short stories, picture books (including illustrations), and biographies. Each book sees the world from her own highly individual perspective. She is a sought-after speaker and is widely known in the children's book world. She lives in Ponte Vedra Beach, Florida.