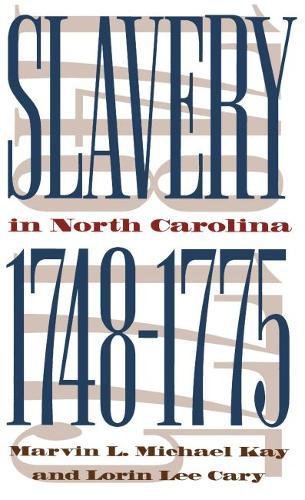 Michael Kay and Lorin Cary illuminate new aspects of slavery in colonial America by focusing on North Carolina, which has largely been ignored by scholars in favor of the more mature slave systems in the Chesapeake and South Carolina. Kay and Cary demonstrate that North Carolina's fast-growing slave population, increasingly bound on large plantations, included many slaves born in Africa who continued to stress their African pasts to make sense of their new world. The authors illustrate this process by analyzing slave languages, naming practices, family structures, religion, and patterns of resistance.
Kay and Cary clearly demonstrate that slaveowners erected a Draconian code of criminal justice for slaves. This system played a central role in the masters' attempt to achieve legal, political, and physical hegemony over their slaves, but it impeded a coherent attempt at acculturation. In fact, say Kay and Cary, slaveowners often withheld white culture from slaves rather than work to convert them to it. As a result, slaves retained significant elements of their African heritage and therefore enjoyed a degree of cultural autonomy that freed them from reliance on a worldview and value system determined by whites.

"[Makes] a very important contribution to the study of early American slavery by showing . . . what it is possible to learn from relatively little in the way of conventional sources."-- Journal of Southern History

Michael Kay and Lorin Cary make it possible for us to understand how much of pre-Revolutionary North Carolina functioned, and how an enduring segment of its population (African in origin) made its way in a new world. The scope of research, the reach of learning, and the wisdom of interpretation in this book are enormous.'