Items related to Sexuality, Politics, and Social Control in Virginia,... 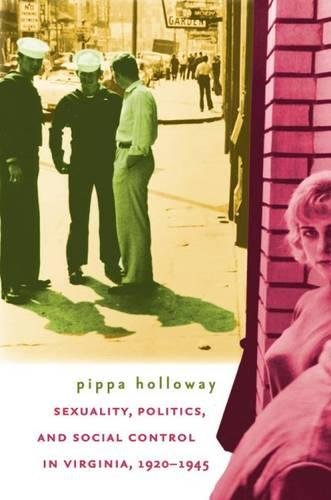 In the first half of the twentieth century, white elites who dominated Virginia politics sought to increase state control over African Americans and lower-class whites, whom they saw as oversexed and lacking sexual self-restraint. In order to reaffirm the existing political and social order, white politicians legalized eugenic sterilization, increased state efforts to control venereal disease and prostitution, cracked down on interracial marriage, and enacted statewide movie censorship. Providing a detailed picture of the interaction of sexuality, politics, and public policy, Pippa Holloway explores how these measures were passed and enforced.

The white elites who sought to expand government's role in regulating sexual behavior had, like most southerners, a tradition of favoring small government, so to justify these new policies, they couched their argument in economic terms: a modern, progressive government could provide optimum conditions for business growth by maintaining a stable social order and a healthy, docile workforce. Holloway's analysis demonstrates that the cultural context that characterized certain populations as sexually dangerous worked in tandem with the political context that denied them the right to vote. This perspective on sexual regulation and the state in Virginia offers further insight into why white elite rule mattered in the development of southern governments.

"A good and workman-like book. . . . [Provides] a solid foundation for future studies of sex, class, race, and politics in Virginia and the rest of the modern South."-- H-Net Reviews