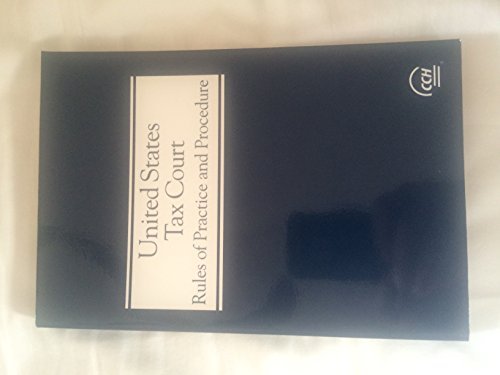 This publication reproduces the full text of the new United States Tax Court Rules of Practice and Procedure, as amended and republished in their entirety, generally effective June 30, 2003. The amended rules contain five new Titles, 29 new Rules and 38 amended Rules. The rules replace interim rules that were issued by the Tax Court on September 16, 1997 and January 26, 1999. In all, this new practice and procedure handbook contains 32 Titles and 334 Rules. In addition to the text of the Rules, the Publication reproduces Appendix I (containing 13 Tax Court Forms), Appendix II (fees and charges), and Appendix III (places of trial), as well as a detailed Index. Many of the changes made to the rules were necessary in order to reflect provisions in the following major pieces of legislation: Taxpayer Relief Act of 1997 (expanded declaratory judgment jurisdiction and new jurisdiction over employment status determinations and large partnership actions) IRS Restructuring and Reform Act of 1998 (new jurisdiction over stand alone actions for innocent spouse relief and lien and levy actions) Community Renewal Tax Relief Act of 2000 (election of small tax case procedures for innocent spouse relief redeterminations under Code Sec. 6015(e) and lien and levy actions) Knowledge of the Tax Court's rules is vital to those who practice before the Tax Court. This publication is intended to make these rules more readily available to practitioners, so that they can practice with confidence.

Book Description CCH, 2003. Paperback. Condition: Good. Item may show signs of shelf wear. Pages may include limited notes and highlighting. May include supplemental or companion materials if applicable. Access codes may or may not work. Connecting readers since 1972. Customer service is our top priority. Seller Inventory # mon0001490313