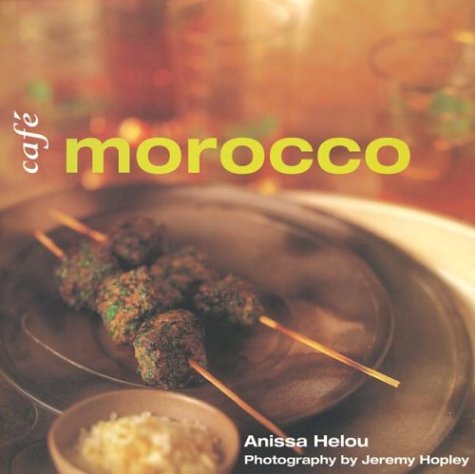 The Moroccan cuisine blends African, Arabian, and European influences to make some of the most exotic food in the world. The subtle and fragrant flavors of the cuisine are adapted for the modern kitchen in this cookbook. Many of the 75 dishes featured are the same offered at Moroccan bistros, where strollers can stop and have kebabs or steaming couscous. Most important, the recipes are simple to prepare and healthy to eat!

You'll find a two-page color photo of bŁzrŁq gracing the table of contents in Anissa Helou's Cafť Morocco. It's the visual equivalent of a throaty-voiced muezzin calling the hungry to come admire a plate of Mediterranean mussels. Mussels with Tomatoes and Cilantro struggles so hard to say bŁzrŁq and falls short of the mark. The same is true of HŁt bel ChermŁla, fried fish with spicy cilantro sauce. These Moroccan names for food are words you want to shape for yourself with a mouth filled with exotic deliciousness.

And just such deliciousness is beautifully conveyed by Helou in her introduction to Cafť Morocco. She walks you right into the medina to sample a fabulous array of what she loosely calls street food. In Morocco, Helou writes, "people eat on the streets because of necessity rather than laziness or greed, and they expect the food to be similar to that in their homes.... The only difference between the food they will eat on the streets and that at home is that the former will be cooked by men and the latter by women." Mint and Caraway Soup. Does that sound like street food to you? Or how about Grilled Pepper and Tomato Salad? Or Quail and Almond Bastiya?

For main dishes, Helou includes recipes for Mechoui (Roast Lamb), Tagine of Lamb with Prunes, another Tagine of Chicken with Sweet Potatoes, Squab Stuffed with Couscous, Spiced Onion with Honey, Lentils with Swiss Chard (also known as 'Adess bil Silq, which seems and sounds much more like it), and Potato Cakes with Cilantro. They eat dessert in Morocco, too. Rice Pudding with Almonds, Orange and Cinnamon Salad, Pastry Crescents with Almond Paste. This is a colorful, well-illustrated little book. The visuals complement the high standards Helou sets with her food writing. Where Paula Wolfert makes you feel like you are back in an anthropology classroom, feeling a little stupid, Helou surrounds the reader with the heart and soul of the food at hand. Short of buying a plane ticket and flying there, Cafť Morocco takes you right to the streets where the best of Moroccan food is found. --Schuyler Ingle

Anissa Helou is a journalist and food writer with a special interest in Middle Eastern and Mediterranean cuisine. She has also written Lebanese Cuisine.