Items related to The Force of Fantasy: Restoring the American Dream

The Force of Fantasy: Restoring the American Dream 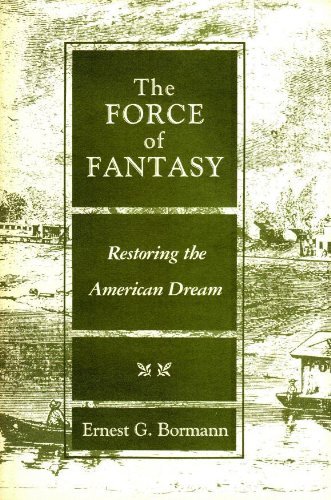 This study is the culmination of a dec­ade of work that began with the contro­versial article, Fantasy and Rhetorical Vision,” which was recently honored by the Speech Communication Association with the Charles H. Woolbert Research Award in recognition of scholarship of exceptional originality and influence.”

With the publication of this long-anticipated book, Bormann offers new insights into the development of Ameri­can thought and the related social pro­cesses of intellectual history and small group communication as well as rheto­rical criticism. To accomplish this he studies religious and reform speaking in the United States from the time of the Puritans to the Civil War.

Not attempting to survey all of the varied practices of preaching and reform speaking, he isolates, describes, and criti­cizes one rhetorical tradition, starting with the Puritan sermon and moving through the emergence of revivalism to the rise of the antislavery reform efforts and culminating in the speeches of Abra­ham Lincoln. He thereby presents for the first time an integrated and structured account of one rhetorical tradition in this country. Of perhaps equal interest to rhetorical critics are Bormann’s research procedures as he presents the first book-length study to utilize fantasy theme analysis.

In this book, first published in 1985, Ernest G. Bormann explores mass persuasion in America from 1620 to 1860, examining closely four rhetorical communities: the revivals of 1739-1740, the hot gospel of the postrevolutionary period, the evangelical revival and reform of the 1830s, and the Free Soil and Republican parties. Each community varies greatly, but Bormann asserts that each succeeding community shares a rhetorical vision of restoring the "American Dream" that is essentially a modification of the previous visions. Thus, they form a family of rhetorical visions that constitutes a rhetorical tradition of importance in nineteenth-century American popular culture.

Ernest G. Bormann is a professor emeritus in the Department of Speech Communication at the University of Minnesota, Minneapolis. His many books include Effective Small Group Communication, The Process of Presentational Speaking, Communication Theory, and Forerunners of Black Power: The Rhetoric of Abolition.

1. The Force of Fantasy: Restoring the American Dream

2. The Force of Fantasy: Restoring the American Dream

3. The Force of Fantasy: Restoring the American Dream