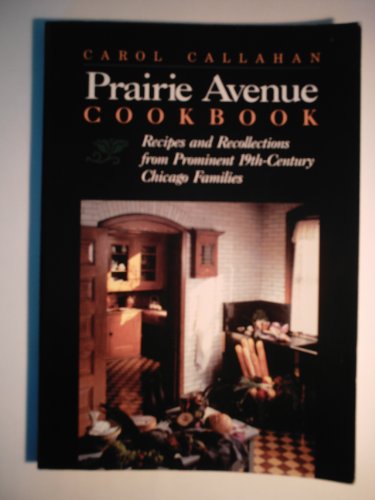 This enchanting cookbook by Carol Callahan allows us to reverse time and transcend space in order to enter a period and place in American history when confidence abounded and all things seemed possible and some Chicago families were able to live in a manner never to be equaled. Judge for yourself. The thirty-five illustrations that accompany the text document what a grand life-style it was.

"If you want to see the richest half-dozen blocks in Chicago. . . drive down Prairie Avenue from Sixteenth Street to Twenty-second. Right there is a cluster of millionaires not to be matched for numbers anywhere else in the country."           Chicago Herald, 1887

And the Herald wasn’t guilty of braggadocio. Prairie Avenue was home to such august individuals as Marshall Field, George Pullman, Philip Armour, Gustavus Swift, William Kimball, Samuel Allerton, Joseph Sears, and John Glessner. Among the delights they enjoyed were the joys of the table the recipes for which, preserved by family members, are shared here for the first time.

Carol Callahan makes it possible to taste the flavors of that opulent era with a collection of more than two hundred historic recipes from the prominent nineteenth-century families of Prairie Avenue. All of the recipes have been tested and modernized for today’s cook. They range from everything you might like for breakfast to however you’d like your oysters to snacks, soups, salads, entrées, preserves, desserts, and some power-packed Prairie Avenue party punches. To place these dishes in their proper context, Callahan includes family anecdotes gathered through oral history interviews that encompass food, meals, health, and entertainment as well as other aspects of nineteenth-century Chicago life.

Callahan devotes part of the book to discussions of the foods available to Prairie Avenue residents, the impact of the rapidly changing technology on cooking, the fine art of dining, the ritual of calling, the problems and pleasures of servants in the household, the children of Prairie Avenue, and the effect of the 1893 World’s Colombian Exposition on Chicago. Whether you elect to prepare these Victorian delights or simply savor them in your imagination, the Prairie Avenue Cookbook is sumptuous fare.

Carol Callahan is curator of the Glessner House Museum for the Chicago Architecture Foundation.

What brings the atmosphere of the neighborhood alive in Callahan’s work are the vignettes of Prairie Avenue life interspersed among the recipes. . . . Callahan sets a his­torical table distinguished by its early Chicago food at which sit a group of rich and indulged, but nonetheless human beings.” Chicago Tribune