Items related to Women with a Thirst for Destruction: The Bad Mother...

Kaminer, Jenny Women with a Thirst for Destruction: The Bad Mother in Russian Culture (Studies in Russian Literature and Theory)

Women with a Thirst for Destruction: The Bad Mother in Russian Culture (Studies in Russian Literature and Theory) 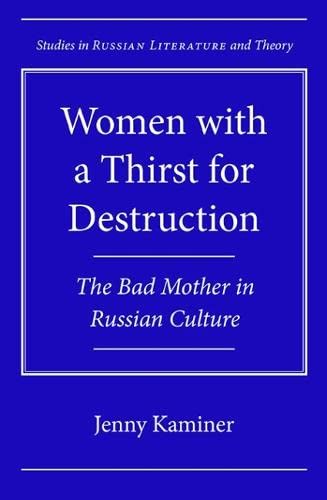 Winner, 2014 Association of Women in Slavic Studies' Heldt Prize for Best Book in Slavic/East European/Eurasian Women's Studies
In Russian culture, the archetypal mother is noble and self-sacrificing. In Women with a Thirst for Destruction, however, Jenny Kaminer shows how this image is destabilized during periods of dramatic rupture in Russian society, examining in detail the aftermath of three key moments in the country's history: the emancipation of the serfs in 1861, the Russian Revolution of 1917, and the fall of the Communist regime in 1991. She explores works both familiar and relatively unexamined: Leo Tolstoy's Anna Karenina, Mikhail Saltykov-Shchedrin's The Golovlev Family, Fyodor Gladkov's Cement, and Liudmila Petrushevskaia's The Time: Night, as well as a late Soviet film (Vyacheslav Krishtofovich's Adam's Rib, 1990) and media coverage of the Chechen conflict. Kaminer's book speaks broadly to the mutability of seemingly established cultural norms in the face of political and social upheaval.

Jenny Kaminer is an associate professor of Russian at the University of California, Davis.

"Kaminer's argument is well supported and grippingly written...[This] excellent book is valuable not only for its insights on female subjectivity but as a case study of individual resistance to cultural stereotyping." - Modern Language Review

"The image of the mother is important for Russian culture, but, as Kaminer deftly demonstrates in her first monograph, its symbolism impacts not just literary studies, but also has wide-reaching resonance politically, economically, and socially. Similarly, Kaminer's study adds a new dimension to European motherhood studies, which historically have largely focused on Western European traditions. This book will be of value to those who are interested in Russian literature, but also family studies, the role of women in society, childhood studies, or the historical transformation of cultural myths." --Journal of Soviet & Post-Soviet Politics & Society

1. Women with a Thirst for Destruction

2. Women with a Thirst for Destruction: The Bad Mother in Russian Culture