Items related to Saved from Oblivion 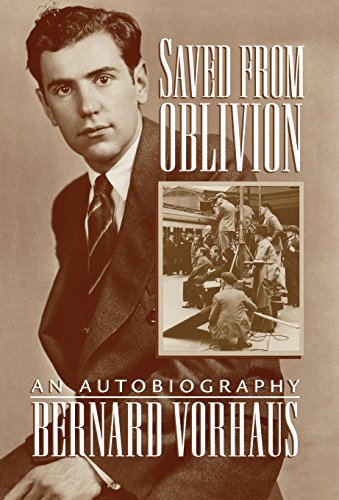 Before being black-listed in the McCarthy era, Bernard Vorhaus was one of Hollywood's most respected silent film writers, working for studios such as Paramount and Metro-Goldwyn-Mayer. Not only did he cross paths with some of the brightest lights in early Hollywood―Greta Garbo, Norma Shearer, D.W. Griffith, John Wayne, Laurence Olivier are some examples―but he was a principal influence upon British filmmaker David Lean. Now in his nineties, Vorhaus recounts some of his pioneering work in film in Saved from Oblivion; he was the first director to incorporate subjective flash-backs and to use a sequence before the main titles. Recently, retrospectives of his films, such as Dusty Ermine and The Last Journey, were shown at the Museum of Modern Art in New York City, as well as at the National Film Theatre and the Edinburgh Festival in England.

This autobiography, replete with insight into the techniques and personas of early cinema, is an important as well as entertaining look at the early history of the medium that shaped the twentieth century. Although Vorhaus did not return to directing after he was prematurely cut from the industry in the wake of McCarthyism, he remembers his years there with nostalgia. "Making films is much more exciting than anything else you can do," he says, and this book proves it.

Vorhaus tells his life story in a novel-like fashion, peppering the narrative with moments of romance, intrigue, and high adventure...Packed with page-turning anecdotes, this is a story that truly was worth saving from oblivion. (Film Review)

1. Saved from Oblivion: An Autobiography

4. Saved from Oblivion: An Autobiography (The Scarecrow Filmmakers Series)

6. Saved from Oblivion: An Autobiography