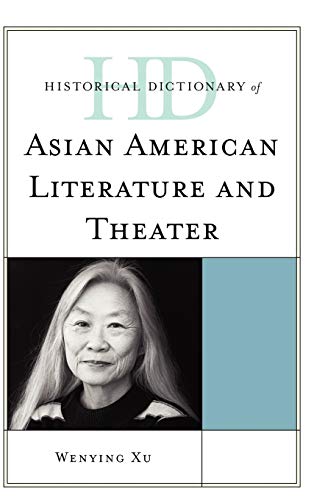 Asian American literature is one of the most recent forms of ethnic literature and is already becoming one of the most prominent, given the large number of writers, the growing ethnic population from the region, the general receptivity of this body of work, and the quality of the authors. In recent decades, there has been an exponential growth in their output and much Asian American literature has now achieved new levels of popular success and critical acclaim. Nurtured by rich and long literary traditions from the vast continent of Asia, this literature is poised between the ancient and the modern, between the East and West, and between the oral and the written.

The Historical Dictionary of Asian American Literature and Theater covers the activities in this burgeoning field. First, its history is traced year by year from 1887 to the present, in a chronology, and the introduction provides a good overview. The most important section is the dictionary, with over 600 substantial and cross-referenced entries on authors, books, and genres as well as more general ones describing the historical background, cultural features, techniques and major theatres and clubs. More reading can be found through an extensive bibliography with general works and those on specific authors. The book is thus a good place to get started, or to expanded one’s horizons, about a branch of American literature that can only grow in importance.

Wenying Xu is professor of English and associate dean of the College of Arts & Letters at Florida Atlantic University. Herself a writer of short fiction, she has also authored two books, one of which is Ethics and Aesthetics in Asian American Literature. She has also written essays for learned journals and anthologies. From 2009 to 2012 she served as president of the Society for the Study of Multi-Ethnic Literature of the United States (MELUS).

Xu (Eating Identities) gathers information on the literary figures, characters, works, terms, movements, and groups that have shaped Asian—including South and Southeast Asian—literature and theater. The 600 alphabetized entries are approximately a paragraph in length each, offer a brief biography or overview of significance, and also include contemporary figures. A fabulous resource for students; veteran researchers will find the 84-page bibliography, judiciously organized by source and theme, a useful springboard to further reading. VERDICT An important addition. (Library Journal)

The growing presence of and scholarly attention to Asian American literature, including the emergence of Asian American theater in the last few decades, means that this field has come a long way since the publication of the first Asian American autobiography in English--Yan Phou Lee's When I Was a Boy in China (1887). The significant contributions and progress made by Asian American authors since that time are truly remarkable in terms of diversity, popularity, and richness of content. This source book offers a chronology that spans 125 years, an excellent introductory essay on major Asian American subgroups, a dictionary, and an extensive bibliography. The majority of the 640-plus entries concern writers of various genres; other entries discuss relevant terms, significant events, and special topics. The entries are alphabetically arranged and cross-referenced. Standard biographical information is provided for each author with dates and titles of their works. The useful overall bibliography, covering nearly 1,200 citations, includes anthologies, interpretation and criticism, selective bibliographies of 67 writers, sourcebooks, and websites. This is a well-researched, comprehensive, and up-to-date reference book and a welcome addition to the literature. Summing Up: Recommended. (CHOICE)

This volume includes essays and reviews submitted by several contributors. It begins with chapters on Chinese opera and cinema, Taiwanese documentary, action cinema of Hong Kong, and profiles of action heroes and female stars. The remainder of the volume is arranged by genre (e.g., drama, kung fu, art cinema and independent films, comedies and musicals, documentaries). Within each chapter are a descriptive essay of the genre, and major representative films, along with information about the film's personnel, a synopsis, and a critique. The book includes a list of recommended reading, a list of online resources, notes on the contributors, and a filmography. Several photographs, both color and black and white, adorn this introductory reference book of selected movies made in China, Taiwan, and Hong Kong. (American Reference Books Annual)