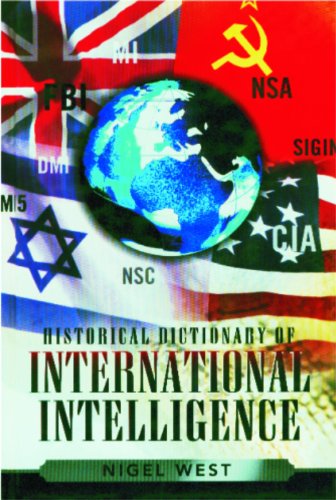 Once dubbed espionage, the practice of intelligence has never been more important nor more sophisticated than it is today. Its coming-of-age began during World War II, which saw the birth of the Office of Strategic Services (OSS) in the United States and the XX Committee to supervise the activities of double agents in Great Britain, and during the Cold War, where its rapid technological advances forever changed intelligence-gathering methods. Today, with the growing concern for terrorism, intelligence is more vital than ever and is needed not only by major powers but virtually all countries.

In this time of change, it is essential to consider the evolution of intelligence, and how well it is coping at present. That, among other things, is the contribution of the Historical Dictionary of International Intelligence. Author Nigel West's second contribution to the series includes a list of acronyms, a chronology, a bibliography, and hundreds of cross-referenced dictionary entries on the agencies and agents, the operations and equipment, the tradecraft and jargon, and many of the countries involved. No military reference collection is complete without it.

Nigel West is a military historian, specializing in intelligence and security issues. He is currently the European Editor of the International Journal of Intelligence and Counter-Intelligence and teaches the history of postwar intelligence at the Centre for Counterintelligence and Security Studies in Alexandria, VA. He is the author of many books, including the Historical Dictionary of British Intelligence (Scarecrow Press, 2005). In October 2003 he was awarded the U.S. Association of Former Intelligence Officers' first Lifetime Literature Achievement Award.

This is the fourth in the publisher's Historical Dictionaries of Intelligence and Counterintelligence series and the second written by West. Similar in format to the other works in the series, it contains a list of acronyms, a chronology (1908-2005), and entries on agencies and agents, operations, jargon, and countries, among them Cuba, Libya, and Spain but not India or Pakistan. Entries range in length from a few short sentences to one to three pages. See and see also references are indicated in boldface type. An extensive bibliography at the back of the book illustrates the scholarship and research conducted by the author. It is not, however, as thorough and in-depth as the bibliographies in other titles in the series because it tries to cover too much territory.

There is some overlap with Historical Dictionary of British Intelligence (2005) and Historical Dictionary of United States Intelligence (2006). One would expect to see much longer entries for key countries such as China and the former Soviet Union. Perhaps it would have been better to divide up the series' international coverage by region rather than trying to cover so much in one volume. This is a useful work, though it's not quite up to the standard of the other titles in the series. Still, it's recommended for public and academic libraries where military history, security, and intelligence are of interest. Terri Tomchyshyn
Copyright © American Library Association. All rights reserved