Items related to Carnegie Hall: The First One Hundred Years 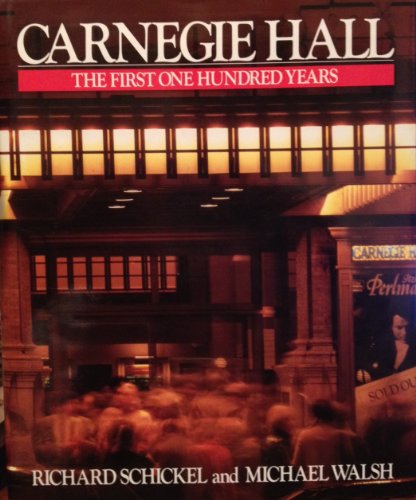 Shows the many performers who have appeared at Carnegie Hall, discusses the political, social, economic, and artistic aspects of the Hall's history, and describes the recent renovation

This is a lavish picture book, designed to celebrate the centenary of New York's celebrated concert hall, and it fills that souvenir function well enough. Schickel, movie critic at Time, previously wrote a much longer book on the hall and has the facts and anecdotes at his fingertips. Walsh, the magazine's music critic, alternates with him in essays that cover the hall's history and hundreds of famous performers, both highbrow and lowbrow, with a smooth blend of social history and critical commentary. But these are only magazine-length contributions to a book that stands or falls by its pictures and lavish production; and here questions must arise. There are far too many large blow-ups and spreads of pictures that simply do not deserve such treatment, and frequent interminable portrait galleries, covering page after page, of musicians and other performers in obvious publicity poses. In the end, the book looks like nothing so much as a glossy scrapbook, of the kind that might be put together by an uncritical fan of the hall. Such a book might be fun to construct, but why would one want to pay a hefty price for it?
Copyright 1987 Reed Business Information, Inc.