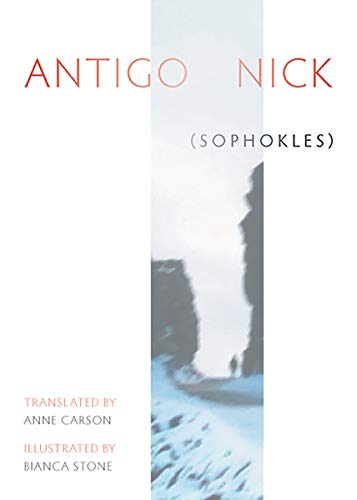 With text blocks hand-inked on the page by Anne Carson and her collaborator Robert Currie, Antigonick features translucent vellum pages with stunning drawings by Bianca Stone that overlay the text.

Anne Carson has published translations of the ancient Greek poets Sappho, Simonides, Aiskhylos, Sophokles and Euripides. Antigonick is her first attempt at making translation into a combined visual and textual experience. Sophokles’ luminous and disturbing tragedy is here given an entirely fresh language and presentation. Thoroughly delightful.

Anne Carson was born in Canada and teaches ancient Greek for a living.

Bianca Stone, the author of Someone Else’s Wedding Vows, received her MFA from NYU in 2009 and is the editor of Monk Books.

Carson is nothing less than brilliant--unfalteringly sharp indiction, audacious, and judicious in taking liberties.

She is one of the few writers writing in English that I would read anything she wrote. --Susan Sontag"

Carson is nothing less than brilliant unfalteringly sharp indiction, audacious, and judicious in taking liberties. "

The reader, the listener is provoked and challenged to the utmost. "

It is a cry of grief posed in question form, emphatic, handwritten, excessive and abbreviated and, in this sense, a measured scream that gives us some sense of who or what lives on when it is all too late. --Judith Butler"

Ms. Carson does more than just update the language and quicken the pacing she rewrites the play, mines its subtleties, its absurdity and its strangely comic timing and manages to produce a unique text out of a story that goes back much further than the fifth century when Sophocles wrote his version. "

A beautiful, bewildering book, wondrous and a bit scary to behold, that gives a reader much to think about without making it clear how she should feel. "

[Antigonick] is both riveting and humorous. Bianca Stone's illustrations are immediate and visceral, and Robert Currie's overall book design has elegance and strength. "