Items related to The Trout Whisperers 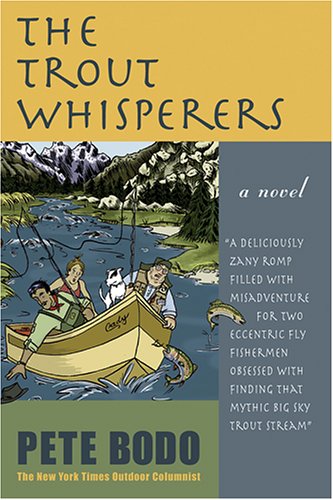 Pete Bodo is a principal Outdoors columnist for the New York Times, author of several books, and a senior editor at Tennis magazine. He lives in New York City.

New York Times outdoors columnist Bodo relates a pratfall-filled shaggy-dog story chronicling the travails of B. Louis Traub and Raul Mendoza, fly-fishermen whose quixotic devotion to their hobby brings them to Montana every year to indulge in bombastic banter, campfire cooking and the prospect of fulfilling their dream of finding the mythical trout haven of Little Gooseneck Creek. But this year's trip is off to a strange start; their longtime fishing buddy, Bowen Kiick, disappears (but leaves them his boat to use), and they pick up an air-headed yoga instructor named Lottie Mofo, whose presence drives a wedge between the fishermen. Meanwhile, a women's underwear–collecting private detective is trailing the trio, hoping they will lead him to Bowen, who is suspected of being a desperado. This is only the beginning, as Raul and Louis stumble into a big-money real estate boondoggle that involves crooked fly fishermen, a water-bottling scheme and a newly discovered insect. Unfortunately, the narrative abruptly flames out into an unconvincingly happy ending after a lengthy buildup. Still, getting to the ending, disappointing as it may be, is a pleasantly meandering excursion that packs more than its share of belly laughs. (July)
Copyright © Reed Business Information, a division of Reed Elsevier Inc. All rights reserved.