Items related to From Winchester to Cedar Creek

From Winchester to Cedar Creek 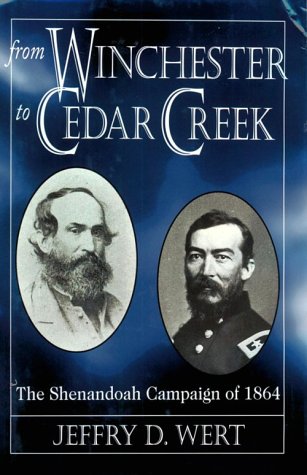 In the Shenandoah Valley campaign of 1864, U.S. Major General Philip H. Sheridan led his army to a series of decisive victories for the Union over Lieutenant General Jubal A. Early and the Confederate Army of the Valley.  In From Winchester to Cedar Creek, author Jeffry D. Wert highlights Sheridan’s victories in the critical area of the Virginia Valley as defining moments of the Civil War.  Sheridan’s campaign ensured Confederate defeat in Virginia and ultimately contributed to Lincoln’s reelection and the Union’s victory in the Civil War.

Drawing on manuscript collections and many published sources, Wert offers vivid descriptions of the battles of Third Winchester, Fisher’s Hill, Tom’s Brook, and Cedar Creek.  The book also explores how the interplay of the strengths and weaknesses of the Union and Confederate commanders, Sheridan and Early, resulted in victories for Sheridan’s Army of the Shenandoah.  Grounded in detailed research, Wert’s compelling narrative portrays the military strategies these commanders employed and how their tactical decisions impacted civilian sacrifice in the Valley.

First published in 1987, Wert’s chronicle remains the definitive book on Sheridan’s command and the Shenandoah Campaign of 1864.  Offering a balanced treatment of both Union and Confederate experiences during the campaign, Wert emphasizes its importance as a turning point in the war from both military and civilian points of view.

Supplemented with situation maps and photographs, From Winchester to Cedar Creek not only documents and dynamically recounts the events that unfolded in the summer and fall of 1864 in the Virginia Valley, but it also details the political, strategic, and tactical forces that made the Shenandoah Valley campaign so important to the outcome of the Civil War.

Virginia's Shenandoah Valley was a crucial avenue for Confederate armies intending to invade Northern states during the Civil War. Running southwest to northeast, it "pointed, like a giant's lance, at the Union's heart, Washington, D.C.," writes Jeffry Wert. It was also "the granary of the Confederacy," supplying the food for much of Virginia. Both sides long understood its strategic importance, but not until the fall of 1864 did Union troops led by Napoleon-sized cavalry General Phil Sheridan (5'3", 120 lbs.) finally seize it for good. He defeated Confederate General Jubal Early at four key battles that autumn.

In addition to a narrative of the campaign (featuring dozens of characters, including General George Custer and future president Rutherford B. Hayes), this book is a study of command. Both Sheridan and Early were capable military leaders, though each had flaws. Sheridan tended to make mistakes before battles, Early during them. Wert considers Early the better general, but admits that few could match the real-time decision-making and leadership skills of Sheridan once the bullets started flying: "When Little Phil rode onto the battlefield, he entered his element." Early was a bold fighter, but lacked the skills necessary to make up for his disadvantage in manpower. At Cedar Creek, the climactic battle of the 1864 Shenandoah campaign, Early "executed a masterful offensive against a numerically superior opponent, only to watch it result in ruin." With more Confederate troops on the scene, history might have been different. Wert relates the facts of what actually happened with his customary clarity and insightful analysis. --John J. Miller

Jeffry D. Wert is the author of several books on the Civil War, including Mosby’s Rangers and Cavalryman of the Lost Cause: A Biography of J. E. B. Stuart.

1. From Winchester to Cedar Creek

2. From Winchester to Cedar Creek

3. From Winchester to Cedar Creek