Items related to Coming Out Conservative 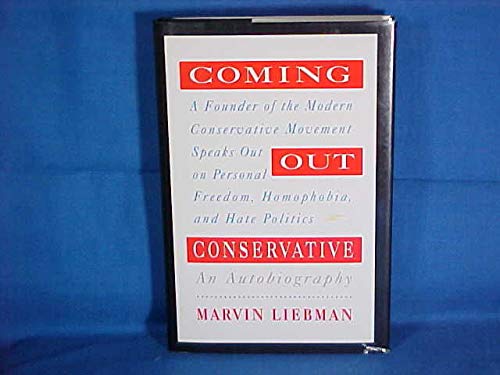 One of the founders of modern American conservatism describes growing up Jewish in New York City, his political activism, his conversion to Catholicism and his decision to make his homosexuality public

An eventful, stylish, sometimes painful memoir by right-wing agitator Liebman. Liebman grew up in Brooklyn as a youthful Communist. But when his hero, onetime Communist Party (USA) chairman Earl Browder, was purged, he turned to the right; and when news of Soviet labor camps broke, Liebman started using techniques he'd learned from the left to mobilize Republicans. He founded Young Americans for Freedom, and the Committee of One Million, which kept Communist China out of the UN for almost 20 years. Liebman is gay, and his story is in large part about his struggle to accept his sexual orientation. In 1990, he ``came out'' in the pages of his friend William F. Buckley's National Review. Here, Liebman expresses deep concern that, with the collapse of the Soviet Union, conservatives are increasingly turning to ``hate politics''--including gay-bashing-- to polarize voters. He argues that, instead, it's the idea of the primacy of the individual over the state that should draw people, including gays, to conservatism. Liebman has lived an eventful life. He's been interned in a British camp for Jewish refugees to Palestine; spent his birthday singing Andrews Sisters songs atop a bombed-out Naples orphanage; and taken time off from politics to become a theatrical producer in London. He's also hobnobbed with the celebrated: ``Bill'' Buckley and his wife Pat appear regularly here, while Ronald Reagan confides his fear that dancers are ``funny.'' And around 1950, we learn, Liebman took a young actress named Nancy Davis--the future First Lady--out to Barney's Beanery in Hollywood (``She was rather square and not very interested in politics''). Andr‚ Gide and Sir James Goldsmith make cameo appearances, and, finally, there's Clare Booth Luce, who, Liebman alleges, said she once ``tried it'' with another woman but found it ``rather messy.'' An absorbing, occasionally awkward book given resonance by the author's struggle with--and final acceptance of--his homosexuality. (Sixteen pages of photographs--not seen.) -- Copyright ©1992, Kirkus Associates, LP. All rights reserved.

In this uneven autobiography, leading conservative activist Liebman chronicles the closeted homosexual life that he lived while pursuing his very public career. In 1990, after 40 years at the forefront of anti-communist politics and involvement in theater production, Liebman announced that he is homosexual in the National Review and the gay newsmagazine the Advocate . Though aware of his sexual orientation at an early age, he avoided publicly declaring it; after a demoralizing dishonorable discharge from the Army and a brief (annulled) marriage, he continued to hide his homosexuality from even his closest friends. Consequently, his book is more about his politics--and such associates as William F. Buckley, Clare Booth Luce and Ronald Reagan--than about his coming out. Asserting his belief in "the importance of the individual over any state, political party or religious hierarchy," Liebman tells of founding, in the mid-1950s, the Committee of One Million, whose mission was to exclude Communist China from the United Nations, and, later, the Young Americans for Freedom and the American Conservative Union. Photos not seen by PW .
Copyright 1992 Reed Business Information, Inc.