Items related to Mommy Laid An Egg: Or, Where Do Babies Come From?

Cole, Babette Mommy Laid An Egg: Or, Where Do Babies Come From?

Mommy Laid An Egg: Or, Where Do Babies Come From? 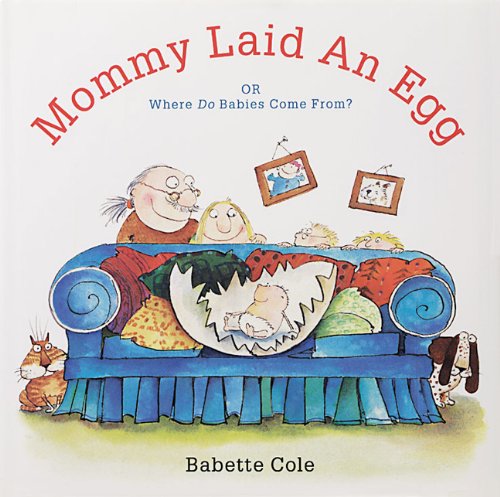 In this hilarious twist on one of the most difficult discussions in a child's development, award winning author Babette Cole illustrates the one question all children are bound to ask: Where do babies come from? Mom explains that you can make babies out of gingerbread, grow them from seeds, or squeeze them out of tubes, while Dad says you can find babies under rocks. Amused by their parents' silly answers, the children decide to set the adults straight. In a series of zany diagrams, the children show the adults exactly where babies come from. The offbeat illustrations are accompanied by a text that is short, simple, and anything but predictable. This is a funny book that will delight, entertain, and educate the entire family.

Babette Cole has written and illustrated many books for children, and also works as a printmaker and card designer. Ms. Cole graduated from the Canterbury College of Art in Kent, England, and now lives in an old cottage in the heart of the English countryside with her beloved dogs and horses.

Cole's drawings and simple text are candid without being offensive and communicate the essentails of conception and childbirth in a direct but light-hearted manner that will leave everyone grinning and no one embarrassed. Publishers Weekly, Starred Review

...an accessible, humorous, accurate look at where babies come from. Booklist

--PUBLISHERS WEEKLY, Starred Review, June 7, 1993
Cole (Supermoo) unleashes her endearingly loony sense of humor on the subject of the birds and the bees, and the result is, as expected, hilarious. When a thoroughly befuddled set of '90s parents (he wears his gray hair in a ponytail, she wears Birkenstocks) decides to inform their offspring how babies are made, their explanations (babies are grown from seeds, made out of gingerbread, squeezed from tubes like toothpaste, brought by dinosaurs) are greeted with an explosion of giggles. Their children quickly grab paper and pen and proceed to set the record straight. Cole's drawings and simple text are candid without being offensive and, without getting terribly complicated or serious, communicate the essentials of conception and childbirth in a direct but light-hearted manner that will leave everyone grinning and no one embarrassed. As always, Cole's idiosyncratic, cartoon-style illustrations are a treat--and her renditions of greenhouse babies and baby-paste tubes are outrageously funny. All ages.


--BOOKLIST, July 1993
In her own inimitable illustrative style, Cole sets out to do what everyone wants done--present an accessible, humorous, accurate look at where babies come from. Retro-hippy Mom and Dad start by telling their two scruffy (but bright) kids that you can make babies out of gingerbread, find them under stones, and squeeze them out of tubes of "baby paste." Laughing uproariously, the two kids tell their parents in simple, plain language how babies are really made, with their explanations illustrated by childlike, anatomically correct (but not graphic) cartoons. While the double-page spread picturing "some ways Mommies and Daddies fit together" may give some readers pause, it answers the question that follows the illustration depicting "this fits in here." The expressive countenances of all concerned lend an air of hilarity to the proceedings that may help see parents through their chilaren's earliest questions on human reproduction.


--KIRKUS REVIEWS, June 15, 1993
The full facts about human reproduction, ingeniously set in a story about parents who are offering their son and daughter some whimsical explanations--"You were delivered by a dinosaur" or "Sometimes you just find them under stones"--while the humor of these possibilities is dramatized in Cole's vibrant, cartoony illustrations. After Mom avers, "You can grow them from seeds...Or just squeeze them out of tubes!" and Dad chimes "Mommy laid an egg," the kids take the discussion in hand. Laughing off the nonsense and remarking that "You were right about the SEEDS, the TUBE, and the EGG," they describe what really happens, illustrating with explicit kindergarten-style drawings--a remarkably innovative way to offer diagrams that are clear without being uncomfortabe detailed; there are even four "ways mommies and daddies fit together," their faces expressing engagingly childlike glee. The lesson continues until "out pops the baby." "So now YOU know," conclude the sensible tots to their wide-eyed parents (whose cheeks have gone much pinker, the only suggestion that this could be embarrassing), "...and so does everyone else," as they open the door to a slew of animals and their young. For those who choose to share these specifics with young children in a notably fresh, matter-of-fact approach. (Picture book 4-8)

1. Mommy Laid An Egg: Or, Where Do Babies Come From?

2. Mommy Laid An Egg: Or, Where Do Babies Come From?

3. Mommy Laid An Egg: Or, Where Do Babies Come From?

4. Mommy Laid An Egg: Or, Where Do Babies Come From?

5. Mommy Laid An Egg: Or, Where Do Babies Come From? Cole, Babette

6. Mommy Laid An Egg: Or, Where Do Babies Come From? Cole, Babette

7. Mommy Laid An Egg: Or, Where Do Babies Come From?