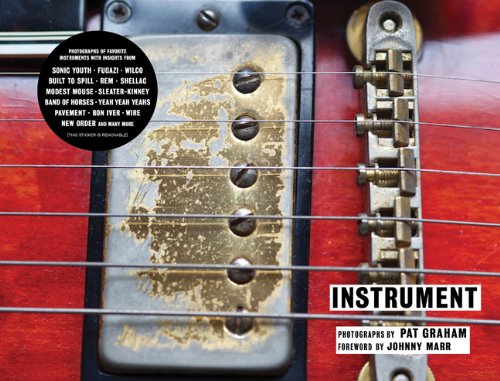 Pat Graham s photographs capture the intimate relationship between musician and instrument told by the signs of wear of fingers on frets or keys, chips, scratches, and modifications by the artists who have played, beaten on, bled over, and made them their own.

For more than ten years, Graham has been documenting these amazing instruments and collecting stories about them from musicians on the road, in clubs, and at home, including members of The Smiths, Sonic Youth, The Flaming Lips, R.E.M., New Order, Wire, Fugazi, Built to Spill, Band of Horses, Modest Mouse, Yeah Yeah Yeahs, and many more. His gritty and beautiful images reveal the physical nature of music.

Pat Graham's photographs have appeared in numerous publications, including Rolling Stone, Spin, Artforum, The Village Voice, Washington Post, and VICE, among others. He lives in London.

Johnny Marr is one of the most influential guitarists of the last thirty years. A founding member of The Smiths, he has also played with The The, Electronic, Modest Mouse, The Cribs, and Johnny Marr and the Healers. He lives in Manchester, England.

" A must-have coffee-table tome for the indie-rock set." -Guitar Aficionado

"poignantly documents the true connection between the artist and his or her instrument, with photographs that are telling, and commentary that is personal and often revelatory." - Under the Radar

"Pat Graham's Instrument is a stunning collection of photographs and anecdotes, illustrating the intimate connection between musician and tool. Photographer Graham shows instruments as more than the sum of their parts; played, shredded and loved, perfected with blood, sweat and tears. Complete with a foreword by Johnny Marr, Instrument depicts these tools of the trade that were recorded and toured with, modified, and that ultimately became treasured heirlooms of members of The Smiths, Sonic Youth, Fugazi, Wilco and many more." - Filter Good Music Guide