Items related to The Woods 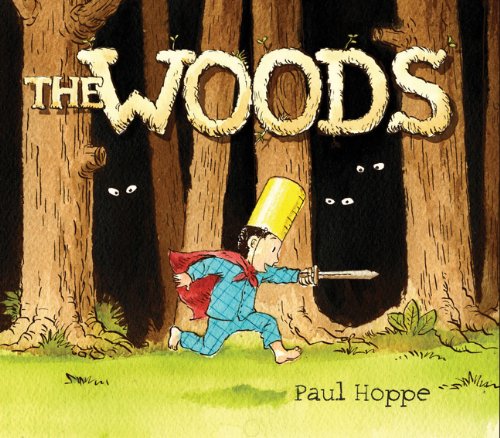 Being afraid of the dark doesn't mean being afraid alone. When a boy can't find his favorite stuffed bunny, he bravely heads into the woods to look for it. Instead, he finds a big, scary brown bear! But the bear is just lonely, so the boy shares his night light and forges ahead with his new companion, until...they run into two frightening giants! As the boy continues on, he comes across other seemingly menacing creatures, but finds that—like him—they're just looking for some comfort and security before bedtime. Simple text and classic European style meet a fresh, modern twist in this delightful picture book.

Paul Hoppe is an award-winning illustrator whose work has appeared in various publications, including the New York Times and the New Yorker. Raised in Germany, he now lives and works in Brooklyn, New York.

"Paul Hoppe's "The Woods" sends its hero out among the trees to search for his lost bedtime bunny. The boy's bedroom quickly gives way, Sendak-style, to the Woods, where the boy confronts and overcomes a parade of scary things. He shares a night light with a fearsome and fearful bear; entertains twin giants with a goodnight story; and gives an achy three-headed dragon a hug.

What the story lacks in originality, Hoppe ("Hat," "Metal Man") makes up for with empathy and likability. There's a reason boys enjoy confronting big hairy monsters over and over again. " - The New York Times

"Readers looking for bedtime stories or tales involving sharing, bravery, or overcoming fear of the dark will be pleased with this endearing tale." - School Library Journal