Items related to The Poetics of Piracy: Emulating Spain in English Literature... 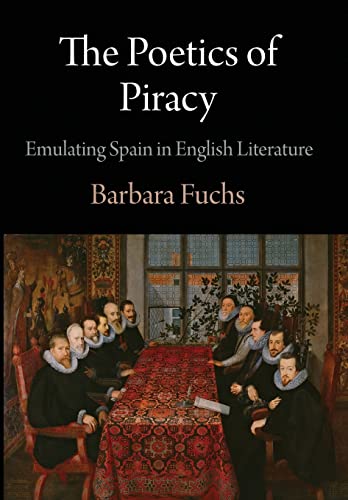 With its dominance as a European power and the explosion of its prose and dramatic writing, Spain provided an irresistible literary source for English writers of the early modern period. But the deep and escalating political rivalry between the two nations led English writers to negotiate, disavow, or attempt to resolve their fascination with Spain and their debt to Spanish sources. Amid thorny issues of translation and appropriation, imperial competition, the rise of commercial authorship, and anxieties about authenticity, Barbara Fuchs traces how Spanish material was transmitted into English writing, entangling English literature in questions of national and religious identity, and how piracy came to be a central textual metaphor, with appropriations from Spain triumphantly reimagined as heroic looting.

From the time of the attempted invasion by the Spanish Armada of the 1580s, through the rise of anti-Spanish rhetoric of the 1620s, The Poetics of Piracy charts this connection through works by Ben Jonson, William Shakespeare, Francis Beaumont, John Fletcher, and Thomas Middleton. Fuchs examines how their writing, particularly for the stage, recasts a reliance on Spanish material by constructing narratives of militaristic, forcible use. She considers how Jacobean dramatists complicated the texts of their Spanish contemporaries by putting them to anti-Spanish purposes, and she traces the place of Cervantes's Don Quixote in Beaumont's The Knight of the Burning Pestle and Shakespeare's late, lost play Cardenio. English literature was deeply transnational, even in the period most closely associated with the birth of a national literature.

Recovering the profound influence of Spain on Renaissance English letters, The Poetics of Piracy paints a sophisticated picture of how nations can serve, at once, as rivals and resources.

Barbara Fuchs is Professor of Spanish and English and directs the Center for 17th and 18th Century Studies of the Clark Memorial Library at the University of California, Los Angeles. Her Exotic Nation: Maurophilia and the Construction of Early Modern Spain and "The Bagnios of Algiers" and "The Great Sultana": Two Plays of Captivity are both available from the University of Pennsylvania Press.

"The Poetics of Piracy provides compelling insight into the development of English national and religious identity as it works energetically to explore the early modern English literati's fraught relationship with Spain. Scholarly interest in transnational cultural exchange has grown in recent years, not least thanks to Fuchs herself, who has sought both to trace influence and to identify its underlying motive. This book is admirably true to those aims."—TLS

"Learned, smart, and original. The questions that Fuchs addresses—national models of literature, ideological rivalry, and literary appropriation—should be of interest across periods and languages."—Walter Isaac Cohen, Cornell University

"The Poetics of Piracy challenges the hegemony of a nationalist English literary history that all too often ignores the rest of Europe, particularly Spain."—Karen Newman, Brown University

1. The Poetics of Piracy: Emulating Spain in English Literature (Hardback or Cased Book)

2. The Poetics of Piracy

4. The Poetics of Piracy: Emulating Spain in English Literature

8. The Poetics of Piracy: Emulating Spain in English Literature