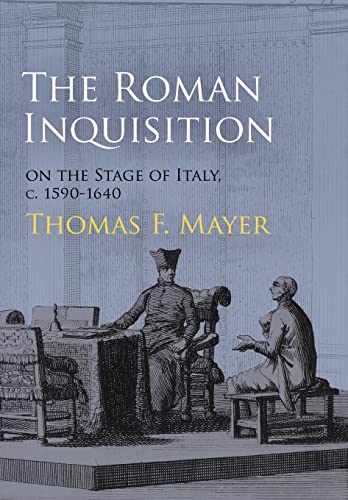 From the moment of its founding in 1542, the Roman Inquisition acted as a political machine. Although inquisitors in earlier centuries had operated somewhat independently of papal authority, the gradual bureaucratization of the Roman Inquisition permitted the popes increasing license to establish and exercise direct control over local tribunals, though with varying degrees of success. In particular, Pope Urban VIII's aggressive drive to establish papal control through the agency of the Inquisition played out differently among the Italian states, whose local inquisitions varied in number and secular power. Rome's efforts to bring the Venetians to heel largely failed in spite of the interdict of 1606, and Venice maintained lay control of most religious matters. Although Florence and Naples resisted papal intrusions into their jurisdictions, on the other hand, they were eventually brought to answer directly to Rome—due in no small part to Urban VIII's subversions of the law.

Thomas F. Mayer provides a richly detailed account of the ways the Roman Inquisition operated to serve the papacy's long-standing political aims in Naples, Venice, and Florence. Drawing on the Inquisition's own records, diplomatic correspondence, local documents, newsletters, and other sources, Mayer sheds new light on papal interdicts and high-profile court cases that signaled significant shifts in inquisitorial authority for each Italian state. Alongside his earlier volume, The Roman Inquisition: A Papal Bureaucracy and Its Laws in the Age of Galileo, this masterful study extends and develops our understanding of the Inquisition as a political and legal institution.

Thomas F. Mayer is author of The Roman Inquisition: A Papal Bureaucracy and Its Laws in the Age of Galileo, also available from the University of Pennsylvania Press, and Reginald Pole: Prince and Prophet. He is also editor and translator of The Trial of Galileo, 1612-1633.

"Thanks to wide-ranging research and new perceptions, Thomas Mayer shows how the Roman Inquisition served popes as both a legal and diplomatic institution as they handled jurisdictional squabbles with the diversely organized states of Naples, Venice, and Tuscany."—Christopher Black, University of Glasgow

"A stunning achievement. Driven by a deep exploration of primary sources, The Roman Inquisition on the Stage of Italy, c. 1590-1640 examines the way investigation, trial, and sentencing procedures played out in different states. No one will be able to treat the Inquisition in the same old-fashioned way again."—Edward Muir, Northwestern University