Items related to Frankenstein: Or, the Modern Prometheus (Signet Classics) 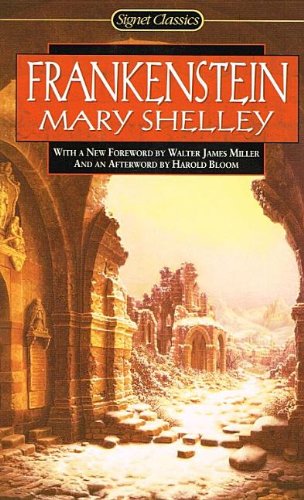 Such were the professor's words—rather let me say such the words of the fate—enounced to destroy me. As he went on I felt as if my soul were grappling with a palpable enemy; one by one the various keys were touched which formed the mechanism of my being; chord after chord was sounded, and soon my mind was filled with one thought, one conception, one purpose. So much has been done, exclaimed the soul of Frankenstein—more, far more, will I achieve; treading in the steps already marked, I will pioneer a new way, explore unknown powers, and unfold to the world the deepest mysteries of creation. I closed not my eyes that night. My internal being was in a state of insurrection and turmoil; I felt that order would thence arise, but I had no power to produce it. By degrees, after the morning's dawn, sleep came. I awoke, and my yesternight's thoughts were as a dream. There only remained a resolution to return to my ancient studies and to devote myself to a science for which I believed myself to possess a natural talent. On the same day I paid M. Waldman a visit. His manners in private were even more mild and attractive than in public, for there was a certain dignity in his mien during his lecture which in his own house was replaced by the greatest affability and kindness. I gave him pretty nearly the same account of my former pursuits as I had given to his fellow professor. He heard with attention the little narration concerning my studies and smiled at the names of Cornelius Agrippa and Paracelsus, but without the contempt that M. Krempe had exhibited. He said that "These were men to whose indefatigable zeal modern philosophers were indebted for most of the foundations of their knowledge. They had left to us, as an easier task, to give new names and arrange in connected classifications the facts which they in a great degree had been the instruments of bringing to light. The labours of men of genius, however erroneously directed, scarcely ever fail in ultimately turning to the solid advantage of mankind." I listened to his statement, which was delivered without any presumption or affectation, and then added that his lecture had removed my prejudices against modern chemists; I expressed myself in measured terms, with the modesty and deference due from a youth to his instructor, without letting escape (inexperience in life would have made me ashamed) any of the enthusiasm which stimulated my intended labours. I requested his advice concerning the books I ought to procure. "I am happy," said M. Waldman, "to have gained a disciple; and if your application equals your ability, I have no doubt of your success. Chemistry is that branch of natural philosophy in which the greatest improvements have been and may be made; it is on that account that I have made it my peculiar study; but at the same time, I have not neglected the other branches of science. A man would make but a very sorry chemist if he attended to that department of human knowledge alone. If your wish is to become really a man of science and not merely a petty experimentalist, I should advise you to apply to every branch of natural philosophy, including mathematics."