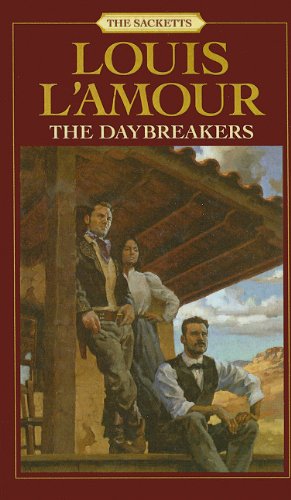 Tyrel and Orrin Sackett hit the trail west and fight to tame the West.

A magnificent saga of American fiction, the Sacketts series is one of the greatest treasures by legendary storyteller Louis L'Amour. In The Daybreakers, L'Amour spins the tale of two brothers who couldn't be more different -- yet remain bound by their restlessness of spirit.

"RIDE WITH THE LAW, NEVER AGAINST IT".

You had to push to start a fight with Orrin Sackett, but not with his brother, Tyrel. Tye had been born to trouble, and the night he stepped between his brother and a bullet changed the course of both their lives forever. Now their trail pointed west, to Santa Fe, a frontier town on the edge of violence -- but justice had to come before putting down roots in a lawless land. Orrin took on the job of marshal, while Tye commanded fear and respect even without a badge. But when a loose end from their past turned up, one brother was forced to revert to his old ways -- if the other's dreams were to be realized....

Tyrel Sackett was born to trouble, but vowed to justice. After having to kill a man in Tennessee, he hit the trail west with his brother Orrin. Those were the years when decent men and women lived in fear of Indians, rustlers, and killers, but the Sackett brothers worked to make the West a place where people could raise their children in peace. Orrin brought law and order from Santa Fe to Montana, and his brother Tye backed him up every step of the way. Till the day the job was done, Tye Sackett was the fastest gun alive.

Book Description Prebound. Condition: New. Prebound. Tyrel and Orrin Sackett hit the trail west and fight to tame the West.Shipping may be from multiple locations in the US or from the UK, depending on stock availability. 204 pages. 0.159. Seller Inventory # 9780812425710