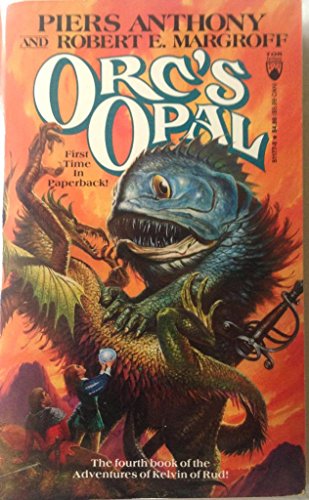 In the kingdom of Rud, Charles, Merlain, and their brother, Dragon Horace, are in the center of a plot against Kelvin as they seek to steal the treasure of the Orc Kingdom

A vast improvement over its predecessor, Chimaera's Copper , this fourth book in the Roundear Prophecy series commands an enjoyable, multilevel plot and some interesting character development. Zady, a witch vowing revenge for the killing of her evil niece, lays a cunning trap by infiltrating a Benign Mages convention and taking over the body of Jon, sister of hero Kelvin. Zady-as-Jon gives cloaks of invisibility to Kelvin's four children, persuades them to steal magical implements and instructs them to use these stolen items to acquire a magical opal from Orc country. The Orcs, scaly and sea monster-like as in times before Tolkien, are not at all peace-loving; the witch hopes that the theft will instigate a war that effectively rids the land of good people while allowing her to gain possession of the opal. A ghost and a dragon must help the children--and several adults--do some rapid growing up.
Copyright 1990 Reed Business Information, Inc.

YA-- This is the fourth in a series of five novels, and it has an introduction and cast of characters that will be helpful to those just discovering the books. Zady, an evil old witch, is bent on revenging her niece's death. Through the use of shape-changing and mind-reading, she manipulates the hero's children into stealing the orc's opal, which controls their use of magic. Young adults will appreciate the main characters' confusion of whether to listen to an adult telling them to do something they know is wrong or to do what they know is right. The time frames may be confusing to the uninitiated, but they can be sorted out for an enjoyable experience even for novice fantasy readers.
- Jacqueline J. Craig, W. T. Woodson High School, Fairfax, VA
Copyright 1991 Reed Business Information, Inc.