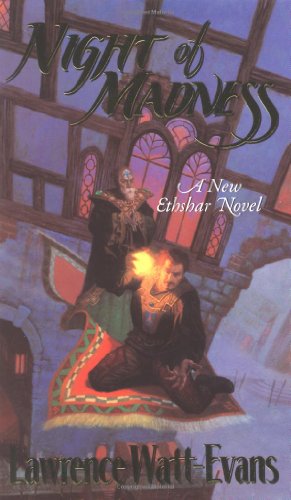 Warlockry has been rare in Ethshar . . . until The Night of Madness, when a mysterious object falls from the heavens, sending out a wave of magic in the form of a dream. All who have the dream awaken in panic. But some of them also awaken to the power or Warlockry.

Throughout the land these newly made warlocks wreak havoc; looting and rioting, petty personal revenge, and uncontrollable madness run rampant. Worse, people are hearing a mysterious, irresistible call from which they never return.

Into this chaos steps the power-hungry Lord Faran, who seeks to use his new warlock powers to overthrow the government and take possession of the throne.

Who will dare to oppose him?

Born and raised in Massachusetts, Lawrence Watt-Evans has been a full-time writer and editor for more than twenty years. The author of more than thirty novels, over one hundred short stories, and more than one hundred and fifty published articles, Watt-Evans writes primarily in the fields of science fiction, fantasy, horror, and comic books. His short fiction has won the Hugo Award as well as twice winning the Asimov's Readers Award. His fiction has been published in England, Germany, Italy, Japan, Spain, Poland, France, Hungary, and Russia
He served as president of the Horror Writers Association from 1994 to 1996 and after leaving that office was the recipient of HWA's first service award ever. He is also a member of Novelists Inc., and the Science Fiction Writers of America. Married with two children, he and his wife Julie live in Maryland.