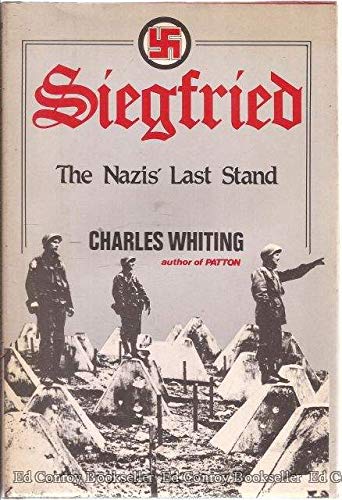 Depicts the final major land battle in Europe during World War II and portrays the experiences of both the Allied and German soldiers, who fought in the campaign

Charles Whiting is the author of several books on World War II. He lives in York, England.

The Siegried Line or the West Wall, as the Germans called it, enabled the Wehrmacht to prolong the war for six months and even to mount the Ardennes Offensive from behind its cover. Whiting was there at the time, at the sharp end, and is a skilled and prolific writer. His comments on the generals are apt....An important book that records one of the most difficult yet least publicised phases of the war. (The Spectator )

Whiting is a very experienced popular military historian who gets the last ounce of drama from the bloody battles in the West between September 1944 and February 1945. (London Times ) --Military History

"From the Great Wall of China to the Maginot Line, nothing... anywhere... ever has been successfully defended." So says General Patton, quoted on pg. 174 of the paperback of this highly readable account of WWII. Siegfried: The Nazi's Last Stand is about the final attacks by British and American forces on Hitler's West Wall at the close of WWII. The author, Charles Whiting is a good writer who gives vivid descriptions of the battlefield and plenty of personal anecdotes. You can get a real sense of the danger and frustrations allied forces faced as they tackled pillboxes and other fortifications again and again. As previous reviewers have mentioned, it is more of a story than a scholarly manuscript, but of course that is the purpose of popular military history! Furthermore, there are plenty of footnotes and references at the end, so the criticism does not really hit home. There are some organizational problems and perhaps a lack of really good photos for today's visual culture, but these too are minor quibbles. Simply put, I thought this was a pretty decent read. --By J. Butler

This book is written in Charles Whiting's usual exciting style and is good for a "one session" read. It describes just what a hard slog the allies faced in the closing months of the war, despite the prevalent (incorrect) view that after D Day it was a simple drive through France and into Germany. Highly recommended --By Mark Metcalfe