Items related to Winning with Integrity: Getting What You Want Without...

Steinberg, Leigh; D'Orso, Michael Winning with Integrity: Getting What You Want Without Selling Your Soul

Winning with Integrity: Getting What You Want Without Selling Your Soul 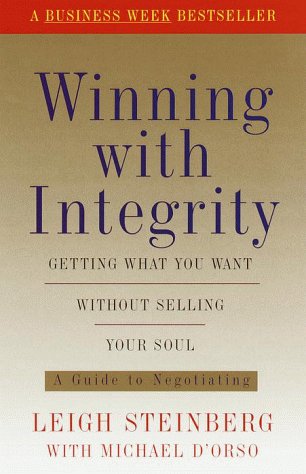 "There really is a Jerry Maguire. Only he's not some schlumpf struggling to make it on a wing and a prayer like Tom Cruise in the movie. . . . His name is Leigh Steinberg, and he's been cultivating a choirboy image for twenty years. He also happens to be the pre-eminent sports agent of our time."

Leigh Steinberg is the premier agent in sports. He has negotiated over $2 billion in contracts for the athletes he represents--who include Troy Aikman, Steve Young, Drew Bledsoe, Kordell Stewart, and Warren Moon--but he has also spent twenty-four years as a sports agent living by a strict personal and professional code of ethics. Steinberg's philosophy of ethical dealings and responsibility is well known in the sports world--and well known to moviegoers as well, because Steinberg's way of doing business was a model for Cameron Crowe's wildly successful film Jerry Maguire and the "manifesto" of business ethics that was the premise of the film.

Steinberg has always believed that negotiation is about more than the bottom line: the most successful business dealings are not always the ones that pay the most; they are about balance, perspective, objectivity, and values. A success in business must also be a success in one's own life. And in his book, Steinberg shares the secrets of successful negotiation, breaking the process down into the essential steps, from "Orientation" through "Making the Deal," and giving step-by-step practical and inspirational advice that will get any two people or parties, in any situation, to come to terms.

Full of great inside sports stories and characters, Winning with Integrity is an intelligent, insightful, and inspiring guide to the art of negotiation in business and in life--from the most successful businessman in sports.

"It's fashionable now, after the movie, for a lot of agents to talk about heart, but Leigh was the only one talking like that in 1993, when I began research."

--Cameron Crowe, director of Jerry Maguire
From the Hardcover edition.

Since entering the nascent field of sports law 25 years ago--before athletes were guaranteed the right of legal representation--Leigh Steinberg has epitomized the high-profile sports agent, successfully negotiating over $2 billion in contracts for superstars like Troy Aikman, Steve Young, and Ryan Leaf. Just as importantly, he has done so with honor and was (according to director Cameron Crowe) a prime inspiration for the agent with a heart in the film Jerry Maguire. Now, arguing that value-driven negotiating techniques can prove equally productive in other settings, Steinberg lays out his step-by-step process in Winning with Integrity: Getting What You're Worth Without Selling Your Soul. Steinberg takes a holistic view on the art of negotiation. In the introduction, he writes:

Steinberg analyzes the entire negotiating process--from preparation and positioning through the actual negotiation and celebratory handshake. And not surprisingly, he enlivens his advice with colorful and entertaining stories taken from his dealings with notable adversaries ranging from the NFL's Jerry Jones to the NBA's Larry Bird. Suggestions for crafting an initial offer with different types of opponents are exceptionally insightful, but the real heart of the material concerns the period between counteroffer and deal signing, where Steinberg candidly explains how he realizes his goals without violating his principles. --Howard Rothman From the Back Cover:

Praise for Leigh Steinberg and Winning with Integrity

"In the evolution of any industry there are pioneers--people who set new standards, procedures, and rules for how business gets done. Leigh Steinberg is the pioneer of athletic representation in the modern world of professional sports, and in Winning with Integrity you get a fifty-yard-line (front-row) seat as to how he accomplished this evolution."

"Over our twenty-one-year relationship, Leigh has been one of the most influential forces in both my personal and professional lives. This book is a testimony to how important negotiations are in all aspects of your life."

"Traditionally, nice guys get run over in the business world, because it is war. Even in sports. Only Leigh could write a book which tells how to win the war while still keeping personal integrity intact."

"Often as I sit across from Leigh discussing contract proposals, I remind myself that the relationship between 'agents' and teams is supposed to be adversarial. Leigh is the master of advancing the interests of his clients in a manner that is consistent with the team's interests. Winning with Integrity is the desktop reference manual on how to get a deal done and preserve the ability to work together after the negotiations end."

"The best negotiators can adapt to any situation, on or off the field. I have been in the most unique circumstances throughout my professional football career and each time Leigh has created a win-win result."

1. Winning with Integrity: Getting What You Want Without Selling Your Soul Steinberg, Leigh and D'Orso, Michael

2. Winning with Integrity: Getting What You Want Without Selling Your Soul Steinberg, Leigh and D'Orso, Michael