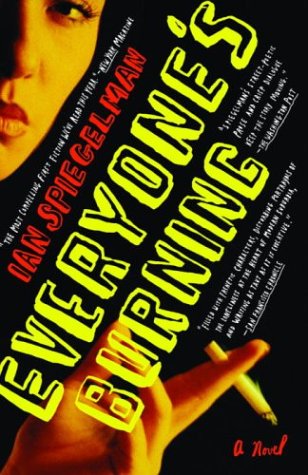 A young man without prospects finds his place in the universe--as a young woman's slave.

Poised somewhere between high school and adulthood, Leon Koch roams the bars and bedrooms of Bayside, Queens, twenty minutes and a thousand psychic miles from Manhattan--a multicultural landscape where the line dividing the middle class from the street gangs has been obliterated. With his two best friends just out of prison for pipe-bombing a house, Koch discovers that cocaine and alcohol have imbued him with "superpowers," twisting his mind into a plexus where love, fear, violence, and intimacy are indistinguishable. As life becomes a waking nightmare spent fighting with police, predators, and the law-abiding, unscarred citizens he dismisses as "normals," Koch drives relentlessly toward a fantasy zone. What he finds is a fetishistic realm of worship and ritual where people are never quite certain whether they're role-playing or getting played by their roles. Testing the bounds of sensation under the constant threat of violence, Koch explores a world that is a slave to its own secrets, where freedom exists only in a 911 call from the brink of self-annihilation.

Told in a hallucinatory, street-poetic voice, Everyone's Burning depicts the lives and deaths of a generation that raised itself on Star Wars, talk shows, and Charles Manson interviews. Koch is a bleary yet gimlet-eyed tour guide through one of their neighborhoods.
From the Hardcover edition.

"This is a body-slam of a first novel. The writing is rough and rich, a shaken-and-stirred blend of Pete Dexter, Hubert Selby, Jr. and Richard Price. The characters are sadly all-too-real, scraping past the underbelly of the outer boroughs of New York City, looking no further than the next drink, score and sunrise. It's a thrill ride through dark and desolate streets, where the losers hang on to the shreds of their lives as tightly as they do the loose change in their pockets and the dreams of a better life resting somewhere under a cloud bank of drink and drugs. Ian Spiegelman comes out hard in his first shot at fiction, scoring with crisp dialogue and warp-speed plotting, leaving behind a first-rate tale littered with the corpses of multi-dimensional characters too riveting to forget, too close to home to shrug away. Bet the house money--this book won't let you down." -Lorenzo Carcaterra, author of Street Boys and Gangster
"Everyone's Burning is brimming over with attitude, energy and talent. This is a kick-ass debut. Spiegelman writes with a rough brio and idiomatic precison." -Jay McInerney

"The Last Exit to Brooklyn has been rerouted to Queens. Forget about walking on the wild side. Everyone's Burning cuts a swath right through it, moving fast and taking no prisoners." -Kim Wozencraft

Ian Spiegelman was born in Brooklyn in 1974 and raised in Bayside, Queens. A graduate of Queens College and a former staff writer for New York, he is currently a reporter for the New York Post's Page Six and a contributing editor at Details. He lives in Forest Hills, Queens.
From the Hardcover edition.

Book Description Random House Publishing Group. Paperback. Condition: Good. A copy that has been read, but remains in clean condition. All pages are intact, and the cover is intact. The spine may show signs of wear. Pages can include limited notes and highlighting, and the copy can include previous owner inscriptions. An ex-library book and may have standard library stamps and/or stickers. At ThriftBooks, our motto is: Read More, Spend Less. Seller Inventory # G0812972619I3N10

Book Description Villard. Paperback. Condition: GOOD. Spine creases, wear to binding and pages from reading. May contain limited notes, underlining or highlighting that does affect the text. Possible ex library copy, will have the markings and stickers associated from the library. Accessories such as CD, codes, toys, may not be included. Seller Inventory # 3103384320

Book Description Villard, 2004. Condition: Good. A+ Customer service! Satisfaction Guaranteed! Book is in Used-Good condition. Pages and cover are clean and intact. Used items may not include supplementary materials such as CDs or access codes. May show signs of minor shelf wear and contain limited notes and highlighting. Seller Inventory # 0812972619-2-4