Items related to An Ars Legendi for Chaucer's Canterbury Tales:...

An Ars Legendi for Chaucer's Canterbury Tales: A Re-constructive Reading 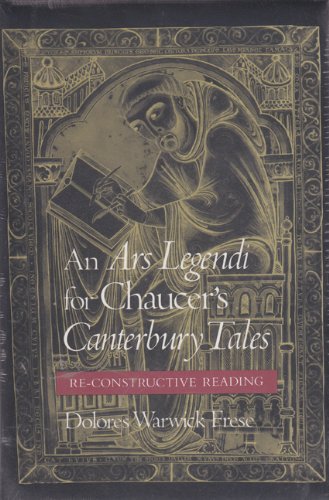 “The freshest and most challenging work on Chaucer to have appeared in many years.” –Chauncey Wood, McMaster University “Saving the appearances of the Ellesmere Manuscript order by means of a bold and brilliant hypothesis about the composition of the Canterbury Tales, Dolores Frese offers Chaucerians some of the most original and persuasive readings of the poem to appear in recent memory; in particular, her demonstration of Chaucer’s intertextual strategies with the Pardoner’s Tale and the Roman de la Rose are most impressive and will probably inaugurate new and vigorous debate about Chaucer’s reading and his allusive sophistication.” –R.A. Shoaf, University of Florida in a daring, original study, Frese argues that the Ellesmere Manuscript of the Canterbury Tales represents Chaucer’s own final plans for the order and number of the Tales, traditionally thought to be unfinished at the time of the poet’s death. Frese contends that Chaucer devised a final plan for the order and number of the Canterbury Tales, that he inscribed this plan into the poetic text, and that this order and number are integral to the poem’s meaning. The poet’s final intentions can be retrieved, reconstructed, and internally verified, she claims, by an intertextual reading of the work as a whole. Frese maintains that the instructions found in the text are retrievable only through the Ellesmere Manuscript, held at the Huntington Library in California. The author discusses number itself as an important textual trope and provides an analysis of the medieval poetic practices of intnegumentum and involucrum. Finally, she postulates how and why early exemplars of Chaucer’s poem became “disordered” in the arrangements represented in the early Hengwrt manuscript and suggests that Chaucer created the “Canon’s Yeoman’s Tale”—included in Ellesmere but not in Hengwrt—to comment on this disaster. Chaucerians, literary theorists, and scholars of medieval French and Italian literature will welcome this modern reading of the Canterbury Tales.

5. AN ARS LEGENDI FOR CHAUCER'S CANTERBURY TALES: A RE-CONSTRUCTIVE READING

6. An Ars Legendi for Chaucer's Canterbury Tales - A Re-constructive Reading

7. An Ars Legendi for Chaucer's Canterbury Tales: A Re-constructive Reading

8. An Ars Legendi for Chaucer's Canterbury Tales: A Re-constructive Reading