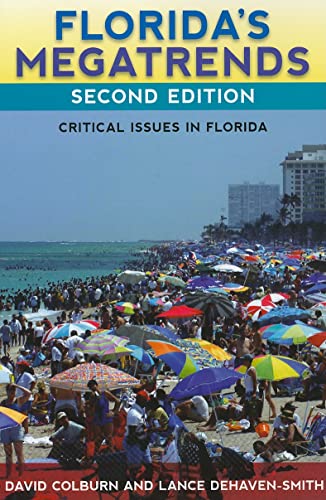 "This brief but powerful book analyzes Florida since the 1870s. ?. . . Here each historical event is included for a reason, and each forecast for the future is based on solid historical precedents. The result is an exciting and informative book."--Florida Historical Quarterly

"Offers an important perspective on some of the most critical issues facing our great state in the twenty-first century."--U.S. Senator Bob Graham

In the first edition of Florida Megatrends, David Colburn and Lance deHaven-Smith revealed the state for what it is: a bellwether for the nation. The intervening years have only confirmed their analyses, as Florida and the U.S. have been battered and transformed by the housing collapse, the great economic recession that began in 2008, record-high gas prices, withering tourism, the 2004 hurricane season, and much more. This completely revised and updated edition brings the story up-to-date.

Florida began the twentieth century rooted in the Confederacy--the least populated of the southern states, with a rural, agricultural, frontier society. By the end of the century, Florida had become the most populated, urban, and culturally diverse state in the South--and the fourth largest in the nation. Florida's Megatrends is a lively overview of the forces that forged Florida in the twentieth century, the trends that are projected for the first quarter of this century, and how both will shape Florida in the future.

The transformation of Florida began with railroad barons and developers from northern states who triggered the 1920s land boom. Waves of migration and immigration continued throughout the twentieth century. With a constant influx of new residents from the Caribbean and Latin America, combined with the African-American and Native American populations, Florida has become one of the most racially and ethnically diverse states in the nation. The state's economy is no longer dominated by agriculture but by tourism, construction, commerce, and technology.

In Florida Megatrends, two of Florida's most respected scholars examine the evolution of the state, the remarkable changes that have shaped it, and the relevant concerns facing Florida in the future from political, historical, sociological, economic, and environmental perspectives.