Items related to Perryville: This Grand Havoc of Battle

Perryville: This Grand Havoc of Battle 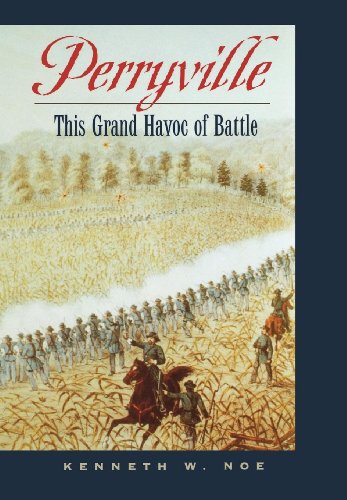 Winner of the Seaborg Award A History Book Club Selection

On October 8, 1862, Union and Confederate forces clashed near Perryville, Kentucky, in what would be the largest battle ever fought on Kentucky soil. The climax of a campaign that began two months before in northern Mississippi, Perryville came to be recognized as the high water mark of the western Confederacy. Some said the hard-fought battle, forever remembered by participants for its sheer savagery and for their commanders' confusion, was the worst battle of the war, losing the last chance to bring the Commonwealth into the Confederacy and leaving Kentucky firmly under Federal control. Although Gen. Braxton Bragg's Confederates won the day, Bragg soon retreated in the face of Gen. Don Carlos Buell's overwhelming numbers. Perryville: This Grand Havoc of Battle is the definitive account of this important conflict.

While providing all the parry and thrust one might expect from an excellent battle narrative, the book also reflects the new trends in Civil War history in its concern for ordinary soldiers and civilians caught in the slaughterhouse. The last chapter, unique among Civil War battle narratives, even discusses the battle's veterans, their families, efforts to preserve the battlefield, and the many ways Americans have remembered and commemorated Perryville.

Kenneth W. Noe holds the Draughon Chair in Southern History at Auburn University in Auburn, Alabama. He is the author of several books and articles.

"An indispensable source for an understanding of the events in Kentucky in the fall of 1862, when Braxton Bragg's Southern soldiers fought courageously to achieve what turned out to be the 'high water mark' of the western Confederacy."―America's Civil War

"For anyone seriously interested in the Civil War in Kentucky, Noe's books is a must buy. It should remain the definitive work of the Perryville campaign for many years."―Bowling Green Daily News

"Noe has authored the essential book on this battle."―Civil War Book Review

"About as detailed as it can get regarding this long-overlooked and recently discovered Civil War battle for Kentucky."―Civil War Courier

"None of the professional works that touch on Perryville . . . can offer the breadth of perspective and the innovative investigation that inform Noe's Perryville."―Civil War History

"An exceptional book. Buffs and serious scholars alike will enjoy what should be the definitive work on this battle for some time to come."―Civil War News

"Does a masterful job of placing the Battle of Perryville, and Kentucky more generally, in the context of the Civil War and southern history."―Filson History Quarterly

"Noe's study of this pivotal campaign will be the standard work on the subject for some years to come. Essential reading on the military events in the west, and a model for future studies."―Florida Historical Quarterly

"Noe's scholarship is very good, his research exhaustive, and his ability to explain the course of events enhances the narrative."―Georgia Historical Quarterly

"Noe has produced a model study that has comprehensively included a broad picture of military strategy and action as well as larger political issues. . . . This comprehensive effort constitutes what battle history ought to be."―H-Net Reviews

"Noe clearly has established himself as a significant player among national Civil War historians of the western theater."―Indiana Magazine of History

"An excellent book that will be hard to surpass in covering this battle."―Journal of America's Military Past

"Perryville was, in the words of one participant 'a square, stand-up, hand-to-hand fight.' In that spirit, Noe has written a model study of just such a Civil War battle."―Journal of American History

"An impressively researched, balanced, and detailed book that will please many readers, especially those who enjoy exciting battle histories."―Journal of Military History

"The best among a good group of modern studies on the Kentucky campaign and by far the most detailed on the battle of Perryville itself. It brings a better recognition of this neglected battle's significance to the war's outcome."―Journal of Southern History

"Noteworthy. . . . Provides a detailed history of this 1862 battle."―Kentucky Monthly

"Untangles the complicated events leading up to and during the crucial battle between the forces of Union General Don Carlos Buell and Confederate General Braxton Bragg."―Kirkus Reviews

"Noe gives a clear sense of the 'grand havoc' referred to in the book's title."―Lexington Herald-Leader

"The first true history of the battle, its aftermath, and the wide-spread repercussions of the South's loss."―McCormick Messenger

"A blow by blow account of not only the battle itself, but also its prelude and, most importantly, its aftermath."―New 4U

"Noe has produced a model study that expands our understanding of a long neglected battle and raises our expectations for future campaign histories."―North Carolina Historical Review

"Noe has rescued this key engagement from obscurity with this masterful study."―Ohio History

"Noe captures the intensity and the frustrations well by delving into personal memoires for much of the battle narrative. Very well written and well worth getting."―Paper Wars

"Noe's outstanding book, which relates the battle to the campaign and to overall Confederate strategy, fills an important need and will doubtless serve as the definitive account of the battle."―Register of the Kentucky Historical Society

"Noe artfully steers the combatants toward Perryville, provides a coherent account of that confused clash, and tells what it meant to soldiers and civilians caught in the maelstrom."―Society of Civil War Historians

"Casts new light on this epic struggle for Kentucky and restores it to a deserved place in the Civil War's pantheon of great campaigns."―Southern Historian

"This superb book unravels the complexities of Perryville, but discloses these military details within their social and political contexts. These considerations greatly enrich our understanding of war, history, and human endeavor."―Virginia Quarterly Review

"Noe writes with a fine eye for detail and a moving prose: his work is a first-rate historical narrative."―Wargamer

"Noe details in stirring prose backed by impressive research, the full dimension of the campaign and the battle that ended in a tactical victory yet could not win Kentucky for the South. In surely the most detailed and exhaustive study to date, Noe has produced in Perryville a work that will stand as the definitive word on a lost opportunity, and a lost dream."―William C. Davis

"While providing all the parry and thrust one might expect from an excellent battle narrative, the book also reflects the new trends in Civil War history in its concern for ordinary soldiers and civilians caught in the slaughterhouse."―cmapaigns-books.blogspot.com

1. Perryville: This Grand Havoc of Battle

2. Perryville: This Grand Havoc of Battle

3. Perryville: This Grand Havoc of Battle

4. Perryville - This Grand Havoc of Battle

7. Perryville: This Grand Havoc of Battle

8. Perryville: This Grand Havoc of Battle