Items related to Reform in America: The Continuing Frontier

Reform in America: The Continuing Frontier 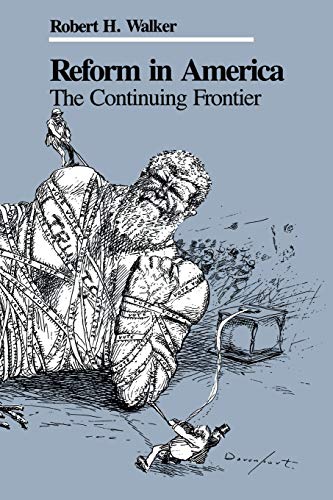 "In discussing slavery and woman's rights, social security and the graduated income tax," writes Robert Walker, "the reformers have defined and redefined America." Recognizing in the history of reform a prime source for the discovery of cultural priorities, Walker seeks in Reform in America to organize the reform experience in a new way, so that its collective patterns can be seen.

Reform in America identifies three principal streams of reform advocacy in American history. Politico-economic issues, the mainstream of reform, are exemplified by a detailed study of the politics of money from 1832 to 1913. Reform on behalf of special groups, the second major category, is illuminated by the examples of movements on behalf of blacks and women and by an examination of the civil liberties and civil rights movements, which again have been principally concerned with the extension of rights and liberties to particular groups. A third category is established by connecting communitarianism, utopianism, and visionary planning to form a tradition through which ideal alternatives are offered to the existing social order.

Walker's interpretation minimizes the stark contrasts in social activity and underlines those continuous forces that have moved American society steadily in the direction of broadened political participation, increased concern for special groups, and a dynamic sequence of cultural goals. He thus draws our attention to what may be America's most lasting frontier―the management of social change toward certain general objectives. The appreciation of reform, in the end, requires an adjusted perception of the national character, one that sees competitive individualism as at least balanced and perhaps outweighed by a demonstrated preoccupation with the common weal.

Robert H. Walker is the author of The Poet and the Gilded Age and Life in the Age of Enterprise. He is professor of American civilization at the George Washington University and has served as editor of the American Quarterly.

1. Reform in America: The Continuing Frontier

Shipping: US$ 13.63
From United Kingdom to U.S.A.
Destination, rates & speeds