Items related to Peace Works: The Citizen's Role In Ending The Cold... 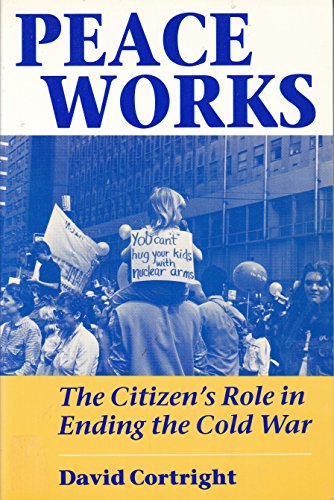 The book argues that citizen peace activists played a significant role in ending the Cold War, and that grassroots social movements have the power to shape the development of history. "Peace Works" shows how, when and where public opinion and US policy were influenced by the actions and ideas of the peace movement. Special anecdotes and personal stories are included and there are insider accounts and unpublished sources on the remarkable events of the late 1980s, including Reykjavik, Rian-Contra and the fall of the Berlin Wall.

The author, former executive director of SANE, offers a boosterish argument that ordinary citizens played a significant role in ending the Cold War. He challenges the theory that the collapse of the Soviet Union vindicates a nuclear-deterrent strategy. "Peace," he concludes, "was achieved in spite of, not because of, the arms buildup." Cortright emphasizes two key mechanisms of social change--public opinion and the legislative process. Chronicling the emergence of the nuclear freeze movement, he describes the Nobel Prize-winning efforts of Physicians for Social Responsibility and the involvement of the religious community. Next he analyzes the impact of media, such as the airing of the television film "The Day After," on public opinion; heavy media coverage of the freeze movement in the 1980s, for instance, was echoed by a similar focus in public opinion polls. He explores how peace-movement pressures influenced the outcome of policy debates and helped restrain Star Wars and nuclear testing. While arguing that change in the Soviet Union was primarily internally motivated, Cortright maintains that Western peace movements have helped the process. He also extends his analysis to U.S. Central America policy.
Copyright 1993 Reed Business Information, Inc.