Items related to After Such Knowledge, What Forgiveness? My Encounters...

Randal, Jonathan C. After Such Knowledge, What Forgiveness? My Encounters With Kurdistan

After Such Knowledge, What Forgiveness? My Encounters With Kurdistan 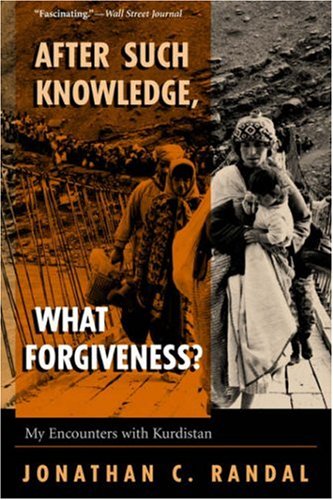 Years ago, noting that Kurds—the largest ethnic group in the world without their own country—were involved in every major story he covered in Iran, Israel, Turkey, Lebanon, and Iraq, veteran reporter Jonathan Randal decided to produce this first-hand report on Kurdistan, a shocking, tragic account of diplomacy and politics in the Middle East, and a gripping adventure story about being a war reporter in the 1990s.Throughout the Kurds' history, world powers have promised to help them achieve autonomy, and each time the Kurds have been betrayed. But they are also masters of betrayal: Randal, recording their talent for vehement internecine warfare and their gift for friendship, takes us behind the headlines to the inner story of power politics in the Middle East. His sympathetic knowledge of Kurdish history and his unparalleled access to Kurdish leaders and to diplomats, ministers, intelligence agents, warriors, and journalists makes him the only writer able to get this story for us and discover the truth.

Their homeland was divided out from under them, scattering them across Iraq, Iran, Syria, Turkey, and the former Soviet Union and denying them long-awaited acceptance and peace. Saddam Hussein gassed them; Stalin deported them; Turkey tried to rob them of their own language and today has them engaged in a bitter guerrilla war. Assassinated in Iran, suppressed in Syria--even among their own kind the Kurds are victims of betrayal as one Kurdish faction wages war on another. This is the bitter truth of journalist Jonathan C. Randal's book, After Such Knowledge, What Forgiveness?, an account of his decades-long fascination with the Kurds.

After he was evicted from his apartment by a band of Kurdish mercenaries during the Lebanese civil war, there was no looking back for Randal; for almost 30 years he has roamed the Middle East following the Kurds' fate. In addition to accounts of these travels, Randall also delivers a scathing indictment of U.S. involvement in--and betrayal of--Kurdish interests. Randal details every breach of faith, starting with Henry Kissinger's acquiescence in the Shah of Iran's massacre of thousands of Kurdish fighters supported by the U.S. in their war against Iraq right up to the Bush administration's abandonment of a Kurdish uprising against Saddam Hussein it had initially encouraged. Whether it is the treachery of outsiders or the perfidious behavior of the Kurds themselves, After Such Knowledge, What Forgiveness? explicates the terrible history and bitter future of this ancient people.

1. After Such Knowledge, What Forgiveness? My Encounters With Kurdistan Randal, Jonathan C.

2. After Such Knowledge, What Forgiveness? My Encounters With Kurdistan