Items related to Russia Beyond Communism: A Chronicle Of National Rebirth... 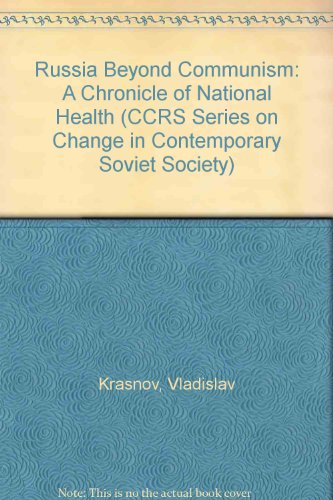 Arguing that the reforms initiated by Mikhail Gorbachev are leading toward the formation of a Russian nation-state, the author analyzes the current debate among Soviet writers about the nature of the post-communist future. His discussion of the ideas of such national figures as Aleksandr Solzhenitsyn and Dmitrii Likhachev, alongside other significant though less well-known authors, lends support to the belief that today's liberal nationalists could become a formidable sociopolitical force in the Russia of tomorrow.

Book Description Paperback. Condition: Acceptable. Connecting readers with great books since 1972. Used books may not include companion materials, some shelf wear, may contain highlighting/notes, may not include cdrom or access codes. Customer service is our top priority!. Seller Inventory # S_318343064

Russia Beyond Communism : A Chronicle of National Rebirth

Russia Beyond Communism: A Chronicle Of National Rebirth

Book Description Paperback. Condition: Good. Item is in good condition. Some moderate creases and wear. This item may not come with CDs or additional parts including access codes for textbooks. Might be an ex-library copy and contain writing/highlighting. Photos are stock pictures and not of the actual item. Seller Inventory # DS-0813383617-3